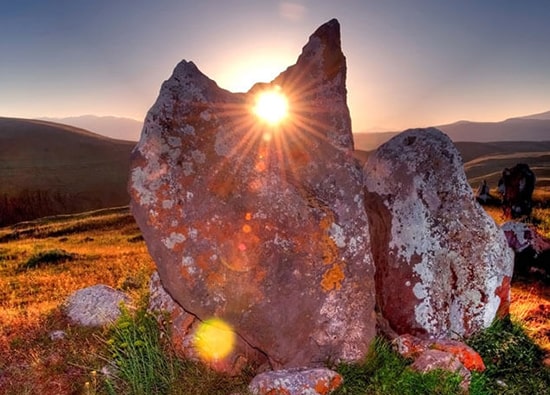 Karahunj, also called Zorats Karer is a prehistoric archaeological site in the Syunik Province of Armenia. It is also often referred to in international tourist lore as the Armenian Stonehenge.

The heights of the stones range from 0.5 to 3 m (above ground) and weight up to 10 tons. They are basalt stones, eroded by time and covered with moss and lichen of many colours. The inside surface of holes preserved much better.

84 of the stones feature a circular hole, although only 37 of the stones, with 47 holes, are still standing. They have been of interest to Russian and Armenian archaeoastronomers who have suggested that the standing stones could have been used for astronomical observation. Seventeen of the stones were associated with observations of sunrise or sunset at the solstices and equinoxes, and 14 with the lunar extremes.