Pagan Garni Temple built in the 1st century by the Armenian King Tiridates I and dedicated to the God of the Sun Areg (Mihr). The temple is at the edge of a triangular cliff, which overlooks the ravine of the Azat River and the Gegham mountains.

The temple is a peripteros built on an elevated podium. The temple is supported by a total of twenty-four 6.54-metre high columns of the Ionic order: 6 in the front and back and 8 on the sides.

9 large steps with a height of 30 centimeters give the majesty and solemnity to the building, built in Hellenistic architectural forms. It’s the only extant monument in the territory of Armenia, related to the era of paganism and Hellenism.

In 1679 the temple suffered from a strong earthquake, and during the Soviet power in the 70s it was rebilt.

The 3rd-4th centuries floor mosaics are perhaps the most impressive part of the bath house. That in the main mosaic depicts a water scene with the sea goddess Thetis and other mythological figures set against. The inscriptions on the mosaic are Greek. 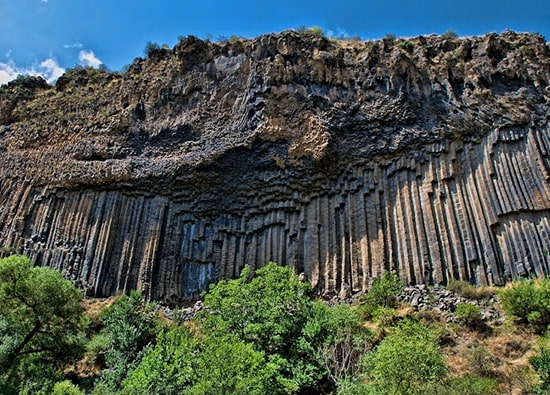 The Azat is known for its numerous spectacular waterfalls and its rock choked river bed. One section of the Azat, where it meets River Goght, is particularly fascinating. It is a canyon known as Canyon of Garni.

The canyon is composed of regular hexagonal prisms. Near its end, the gorge's beautiful formation has prompted the name "Symphony of Stones" or "Basalt Organ".

If you look at the gorge from a distance, the rocks seem like a giant organ. An amazing strangeness of basalt columns’ regular forms catches the eye and causes delight. Practically perfect columns look as if they were specially carved by a human hand, and not by nature itself.

On a promontory above the gorge the Garni temple may be seen. 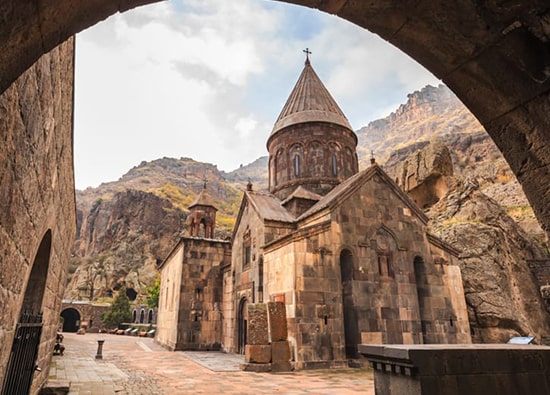 The Geghard (XIII century) - a monastery complex, entered in the list of World Cultural Heritage by UNESCO.

The full name is Geghardavank, literally "spear monastery". The name of the monastery complex comes from the Spear of Christ (Spear of Longinus), which the Roman warrior Longinus drove into Jesus Christ. The spear is now kept in the museum of the Etchmiadzin cathedral.

Some of the churches within the monastery complex are entirely dug out of the cliff rocks, others are little more than caves, while others are elaborate structures, with both architecturally complex walled sections and rooms deep inside the cliff.

The monastery was founded in the 4th century, according to tradition by Gregory the Illuminator. The site is that of a spring arising in a cave, which had been sacred in pre-Christian times, hence one of the names by which it was known, Ayrivank (the Monastery of the Cave). The first monastery was destroyed by Arabs in the 9th century. Nothing has remained of the structures of Ayrivank.

The main church was built in 1215 under the auspices of the brothers Zakare and Ivane, the generals of Queen Tamar of Georgia, who took back most of Armenia from the Turks.