The length of the program 7-8 hours, excluding lunch stop (optionals, not included in the price) 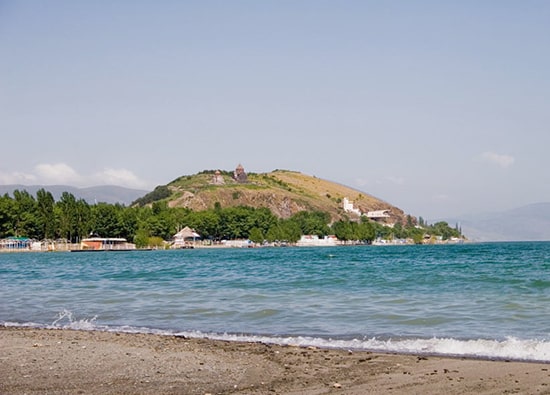 Lake Sevan is a freshwater lake in the Armenian highlands. It is the largest lake in the Caucasus. It is guaranteed as the largest source of fresh water in the region. It is fed by 28 rivers and streams. Only 10% of the incoming water is drained by the Hrazdan River, while the remaining 90% evaporates.

Sevan originated during the early Quaternary when a Palaeo-Sevan, ten times larger than the present lake, came into existence by tectonic formation. The current lake was formed some 25 to 30 thousand years ago.

The Lake Sevan consists of two unequal parts called Big Sevan and Small Sevan. In the north-western part is located the Sevan's Peninsula which is famous for its medieval monasteries and khachkars (cross-stones).

Sevanavank - a monastery in the north-west coast of the lake. The monastery is located on Sevan peninsula, which was previously a small island.

According to an inscription in one of the churches, the monastery of Sevan was founded in 874 by Princess Mariam, the daughter of Ashot I (who became a king a decade later). At the time, Armenia was still struggling to free itself from Arab rule.

The monastery was strict as it was mainly intended for those monks from Etchmiadzin who had sinned. Jean-Marie Chopin, a French explorer of the Caucasus, visited there in 1830 and wrote of a regimen restraining from meat, wine, youth or women. Another explorer visited the monastery in 1850 and wrote of how manuscripts were still being copied manually.

The two churches of the complex, Surp Arakelots meaning the "Holy Apostles" and Surp Astvatsatsin meaning the "Holy Mother of God", are both cruciform plan structures with octagonal tambours. The two are quite similar to each other in appearance. Adjacent are the ruins of a gavit whose roof was originally supported by six wooden columns. Some of the remains of the gavit and its columns can be seen in the Yerevan Museum of History. 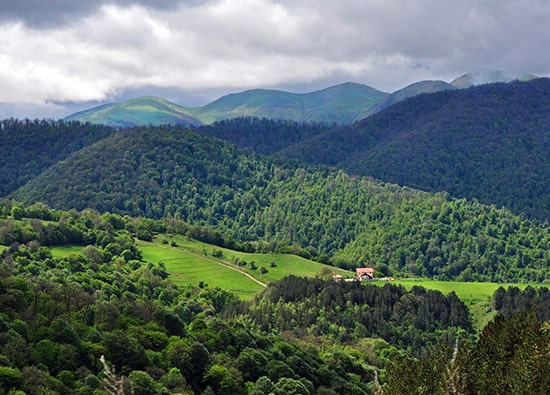 Dilijan - a small town-resort, located on the picturesque banks of the river Aghstev. Dilijan is is one of the most important resorts of Armenia, situated within the Dilijan National Park.

The climate in Dilijan is cool during summer and cold with snowfalls in winter. With its montane climate, Dilijan is a town-resort with favorable oxygen regimen, unique landscape features and curative mineral water. Usually called Armenian Switzerland or Little Switzerland by the locals.

During the medieval period, the territory of Dilijan was known as Hovk. Hovk was a favourite forest and a summer resort for the Arsacid kings to show their abilities in hunting.

In the second half of the 19th century, Dilijan became a well-known mountain resort the town began to grow gradually. At the beginning of the 20th century, many traditional crafts have been developed in Dilijan including metalsmith, carpet weaving, fine arts, wood engraving and other types of folk crafts.

The Sharambeyan street in the centre, has been preserved and maintained as an "old town", complete with craftsman's workshops, a gallery and a museum. The historic Sharambeyan street renovated through the efforts of the Tufenkian Foundation of Cultural Heritage. 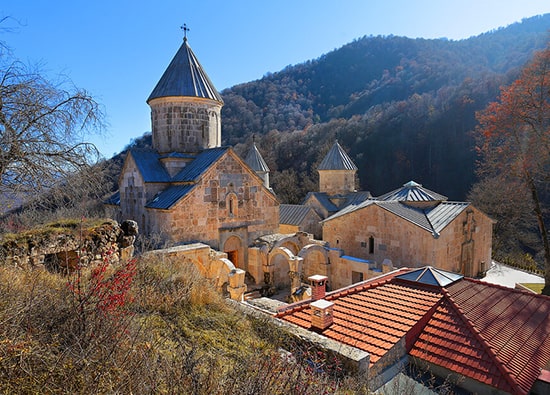 Haghartsin is a 13th-century monastery located near the town of Dilijan in the Tavush Province of Armenia. It was built between the 10th and 13th centuries, much of it under the patronage of the Bagratuni Dynasty.

The oldest large structure of the complex, the St. Grigor Church, is accessible through its gavit.

St. Astvatsatsin Church in Haghartsin (1281) is the largest building and the dominant artistic feature. The sixteen-faced dome is decorated with arches, the bases of whose columns are connected by triangular ledges and spheres, with a band around the drum’s bottom. This adds to the optical height of the dome and creates the impression that its drum is weightless.

The small St. Stepanos Church dates back to 1244.

The refectory of Haghardzin, built by the architect Minas in 1248, is pided by pillars into two square-plan parts roofed with intersecting arches. The walls are lined with stone benches, and at the western butt wall, next to the door, there is a broad archway for the numerous pilgrims to navigate. The proportionally diminishing architectural shapes create the impression of airiness and space. 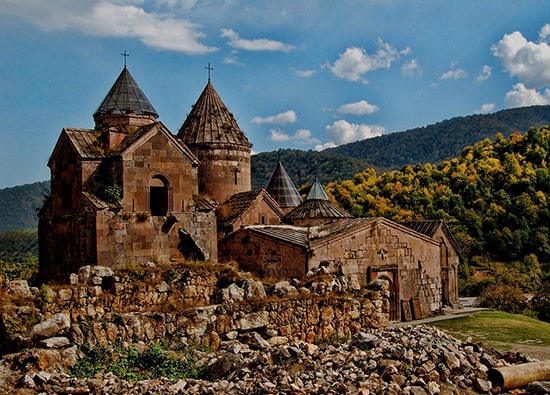 Goshavank (also Nor Getik) is a 12th- or 13th-century Armenian monastery located in the village of Gosh in the Tavush Province of Armenia.

The impressive monastery which has remained in relatively good condition also houses one of the world's finest examples of a khachkar.

Goshavank was erected near the place of an older monastery once known as Nor Getik, which had been destroyed by an earthquake in 1188.

Mkhitar Gosh, a statesman, scientist and author of numerous fables and parables as well as the first criminal code, took part in the rebuilding of the monastery.

The complex was later renamed Goshavank and the village named Gosh in his honor.

The book depository with a bell tower in Goshavank is a structure of unusual composition. Originally, before 1241. there had been in its place a small building with niches for keeping books with a wooden glkhatun type ceiling.

The khachkars created by the carver Pavgos in Goshavank stand out among the rest. The best of them is a 1291 khachkar with the maker's name carved in the bottom left star, which is one of the most intricate examples in existence.