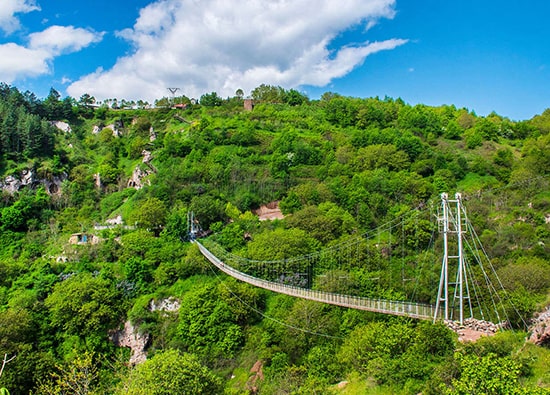 Khndzoresk is a village in the province of Syunik. In the end of the 19th century Old Khndzoresk was the biggest village of Eastern Armenia. Khndzoresk is widely famous for its canyon with picturesque rock formations and ancient cave settlement.

The historic cave village, located on the steep slope of a gorge, is comprised of both natural and manmade caves. The artificial caves, some of which are currently used as stables and warehouses, used to be inhabited till the 1950s.

Since many of the dwellings were carved out over and around each other, a complex system of ropes and ladders were required for people to reach many corners of the community.

In 2012 there was built "Swinging Bridge" over the gorge that connects the two banks of the old village Khndzoresk. The height of the bridge is 63 meters and its length is 160 metres.

The new bridge connects Old Khndzoresk and New Khndzoresk, the modern village, bridging Armenia’s history with the present day both figuratively and literally.