The length of the program 11 hours, excluding lunch stop (optionals, not included in the price) 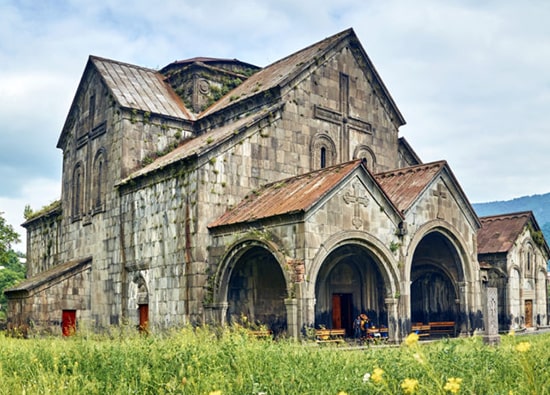 Akhtala is a 10th-century Armenian Apostolic Church monastery located in the town of Akhtala in the marz of Lori.

The main church at the compound is famous for its highly artistic frescoes, which cover the inside walls, the partitions, and the bearings of the building.

The fortress was built on an elevated rocky outcrop surrounded by deep canyons from three sides forming a natural protection. The walls and towers of the fortress are built of bluish basalt and lime mortar.

The murals of Surp Astvatsatsin church are one of the best representations of Byzantine art outside the traditional borders of Byzantium. The coloring of the murals is characteristic of typical Byzantine art while the thematic solutions are more Armenian. New and Old Testaments scenes as well as various saints including Saint Gregory the Illuminator are depicted on the murals. A large image of the Holy Virgin is depicted in the dome holding Jesus. The mural has been badly damaged and only parts of it survived. 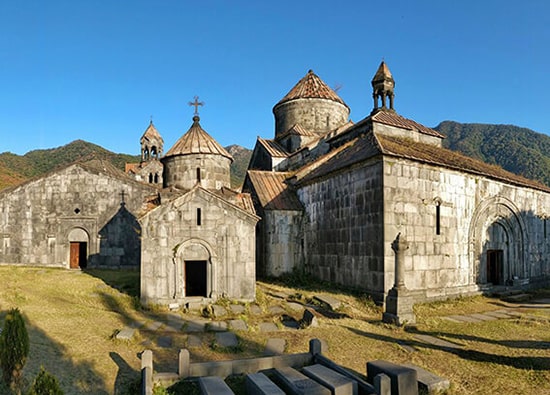 Haghpat Monastery was built, not on a peak, but halfway up a hillside on a site chosen to afford protection and concealment from prying eyes.

Haghpat monastery, together with Sanahin monastery, was placed on UNESCO's World Heritage List in 1996.

The largest church in the complex, the Cathedral of Surb Nshan. It is a typical example of tenth century Armenian architecture, its central dome rests on the four imposing pillars of the lateral walls. A fresco in the apse depicts Christ Pantocrator. Apart from one or two minor restorations carried out in the eleventh and twelfth centuries, the church has retained its original character.

There are also a number of splendid khachkars (cross-stones) of the 11th-13th centuries standing on the territory of the monastery, the best known among them is the "Amenaprkich" (All-Savior) khachkar which has been standing since 1273. 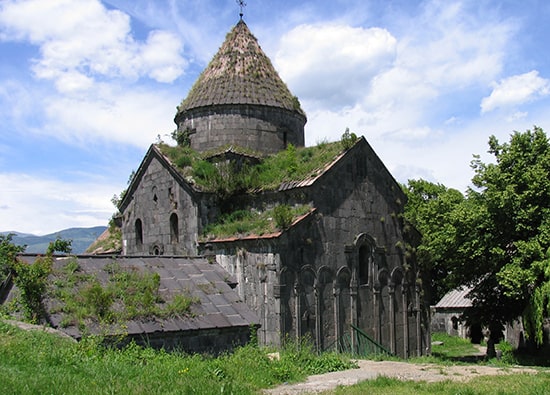 Sanahin Monastery is founded in the 10th century in the Lori Province of Armenia.

The name Sanahin literally translates from Armenian as "this one is older than that one", presumably representing a claim to having an older monastery than the neighboring Haghpat Monastery. The two villages and their monasteries are similar in many ways, and lie in plain view of each other on a dissected plateau formation, separated by a deep "crack" formed by a small river flowing into the Debed river.

The complex belongs to the Armenian Apostolic Church with numerous khachkars (stones with elaborate engravings representing a cross) and bishop gravesites scattered throughout it.

Odzun Church is an Armenian basilica constructed around the 5th–7th century in the Odzun village of the Lori Province.

The first church appeared here in the 6th century. In the 8th century it was reconstructed by Hovhannes III Odznetsi who served as the katholikos between 717 and 728 and was, as his name suggests, from Odzun. This is the time the church got its current form of a pink felsite basilica with three naves, the two side naves being narrow.

At the eastern facade above the central window one can observe a carving of Christ with the gospel of St. John and two angels below.

There are numerous gravestones of the clergy around the church, as well as a funerary monument. The east and west sides of the monument are carved with scenes from the Bible and introduction of Christianity in Armenia.

This is one of only two such funerary monuments in Armenia. The one located in Odzun was given as a gift to Armenia from an Indian king around the 8th century. The other one is situated in Aghudi in southern Armenian province of Syunik.