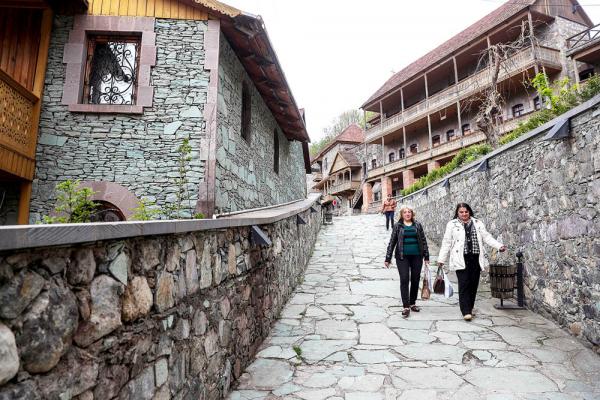 Each week, we spotlight a dream vacation recommended by some of the industry's top travel writers. This week's pick is Armenia.

"When you encounter hospitality in Armenia, you're unlikely to forget it," said Ben Lerwill at BBC. The rugged, mountainous country has been renowned for its generosity to outsiders since the days of the Silk Road, when countless traders, soldiers, and migrants passed through its beautiful, rolling landscape. "As long ago as 400 B.C., the Greek general Xenophon brought his troops this way and gave accounts of tables groaning with lamb, poultry, and barley wine.

" I experienced Armenians' welcoming nature while exploring the Caucasus via marshrutkas, the region's cheap, omnipresent public minibuses. After dawdling too long around the UNESCO-listed monasteries of Debed Canyon, I found myself stranded in Dilijan, a picturesque, forested resort town known locally as Little Switzerland. "A night here would surely be no hardship," but I did need a place to stay.

Using an outdated guidebook, I found a guesthouse on the outskirts of town. Nobody answered when I knocked, so I tried hollering "Barev dzez!" — Armenian for "Hello!" I felt a little foolish, but a middle-aged woman soon opened the gates, regarding me quizzically. When I pointed to my guidebook, she smiled and took my elbow, leading me inside. The house hummed with noise and laughter. My host showed me to my room and then pointed to the dining room, mimed eating, and said "19 o'clock." I dutifully appeared at 7 p.m. and found myself swept into an 18th-birthday celebration for the family's eldest daughter. There were 12 of us, and I was the only stranger. "My hand was shaken vigorously, my seat pulled out for me."

What followed was "a heady, hearty, vodka-fueled evening I simply hadn't seen coming." The plates were piled high with huge portions of barbecued pork, stringy cheese, eggplants, olives, radishes, greens with garlic, and lavash, the unleavened flatbread that's a staple of the Armenian diet. Speaking English, the birthday girl told me that I had an uncle on either side of me, and these jovial, thick-limbed men "took it as their duty" to make sure my glass was never empty of oghi, a potent homemade fruit vodka. As the banquet "roared on," the uncles toasted everyone and everything. I was dizzy when the time came for songs and cakes. "The evening ended with bear hugs all round, and linguistically doomed attempts to declare everlasting kinship."