Armenians, like their Caucasus neighbours, have long been renowned for generosity to outsiders – a result of the country’s historical location on the Silk Road.

I never meant to spend the night in Dilijan. I’d been making my way through northern Armenia towards the capital city of Yerevan, having crossed from Georgia several days earlier. My travels were taking me south, but slowly. The landscapes up here were all muscle and brawn: dry escarpments and deep, hefty canyons.

\It was clear early on that Armenia was going to be interesting. After crossing the border from Georgia I’d hopped onto an old marshrutka – one of the cheap, omnipresent public minibuses that beetle through the Caucasus – and as we pulled away the driver placed a live bird, delicate and honey-coloured, onto the dashboard.

The bird watched the road for five minutes, fluttered in circles over the unperturbed passengers then departed through the window and out into the tough, tawny hills. Was this a homing exercise? A good-luck ritual? I never found out. A sign to expect the unexpected, maybe.

But I never meant to spend the night in Dilijan. I’d dawdled for too long around the Unesco-listed monasteries of Debed Canyon, and by the time I arrived in late afternoon, the marshrutkas, I gathered via sign language, were resolutely done for the day. No transport was forthcoming.

But the little town was attractive, slung across slopes cloaked in oak woods. A night here would surely be no hardship. I later learned that in Soviet times Dilijan had earned a reputation as an artists’ retreat, and that its picturesque forested location means it gets referred to as ‘Little Switzerland’. 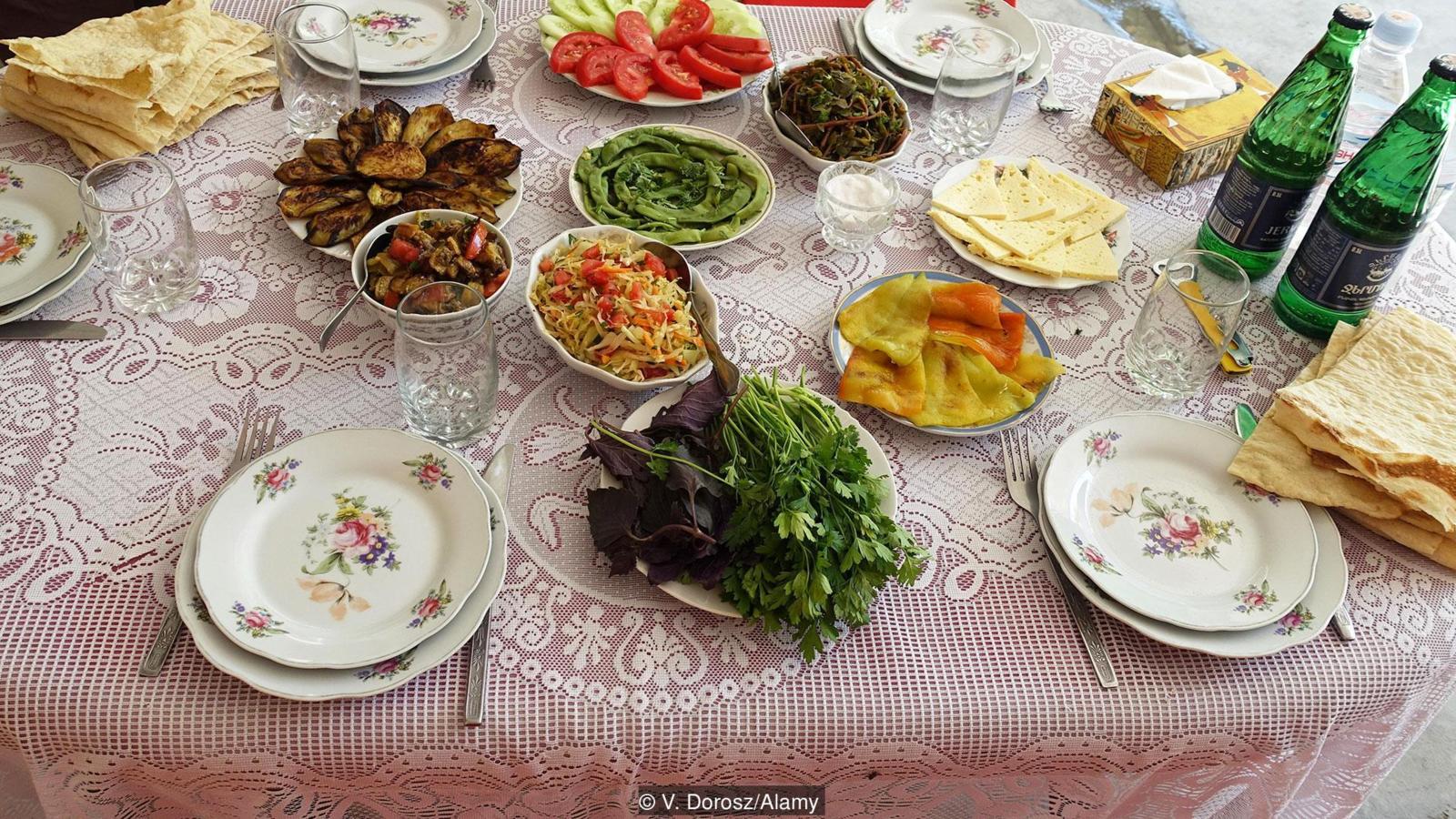 I did, however, need a place to stay. Consulting my outdated guidebook yielded a solitary guesthouse address, which after some investigative work (I found the Armenian alphabet as impenetrable as medieval sheet music), I eventually located high up in the town outskirts. I hoped, as I climbed the street, that I might at least find someone in.

The house was on a quiet residential hill, set back from a dusty road behind metal gates. I knocked, and was met with a long silence. Guests, it seemed, were not a regular occurrence. The chance was considerable, I realised, that it was no longer even a guesthouse. I wondered whether I might have the wrong place. I tried hollering the Armenian words for hello – an optimistic “barev dzez” – into the driveway, first tentatively, then louder, feeling foolish. At last there were footsteps, and the gates were opened by a middle-aged lady in an apron.

She looked at me quizzically. I pointed to my guidebook. To my relief she smiled and took my elbow, ushering me towards the house. I was shown to a basic room with a bed smothered in colourful floral blankets. I became aware that the house was humming with noise. Laughter rang down the corridor. “Nineteen o’clock,” said the lady, in English, pointing to the room opposite. She mimed eating. “Nineteen o’clock.”

I was tired, and confused too – I hadn’t expected dinner – but at 7pm I did as I was asked. What was to follow was a heady, hearty, vodka-fuelled evening I simply hadn’t seen coming. In appearing at the requested hour, I found myself swept into a celebration dinner for the 18th birthday of the family’s eldest daughter. My hand was shaken vigorously, my seat pulled out for me. There were 12 of us sat around the table that night, and a noisy bunch we were: Lusine, the daughter in question; a convivial assortment of her nearest and dearest; and one bemused but delighted traveller.

The food came in huge portions. The lady that had welcomed me in was Lusine’s mother, and she took charge of affairs. Plates appeared piled high with lavash, the unleavened flatbread that forms the staple of the Armenian larder. There were aubergines and olives, fresh radishes and mounds of stringy cheese. Then came barbequed pork, and greens with garlic. At some point there was a bowl of chopped mushrooms fried with onions, and chicken in an unctuous, spicy sauce. The menu became something of a blur.

The reason for this was the oghi, or homemade fruit vodka. Our feast-bearing table was split by gender, with females at one end and males at the other. I gathered, thanks to the English spoken by the birthday girl, that I had an uncle either side of me. Both were jovial and thick-limbed, and took it as their duty to ensure that my shot glass was never dry for a second longer than necessary. Just as the food was brought out liberally, so too was the potent, berry-based firewater.

As the banquet roared on, the uncles insisted that our end of the table drink to everyone and everything. To Armenia. To the UK. To their families. To my family. To people long dead. To the future. To friendship. Some toasts left me clueless, but all went the same way – the chink of glasses, the tossed elbows, the warm throat-burn of alcohol. Soon there were songs, and cakes. I was dizzy with it all. The evening ended with bear hugs all round, and linguistically doomed attempts to declare everlasting kinship.

When I left the next morning, tender-headed but filled with a bumper breakfast and more generous goodwill, my resolve to leave some money for the previous night’s meal received such stern refusal that I backed down for fear of causing insult. After being handed an address for a relative in southern Armenia – a contact I now deeply regret never following up – I was seen off with warmth, and wandered down to the marshrutka yard in a daze. 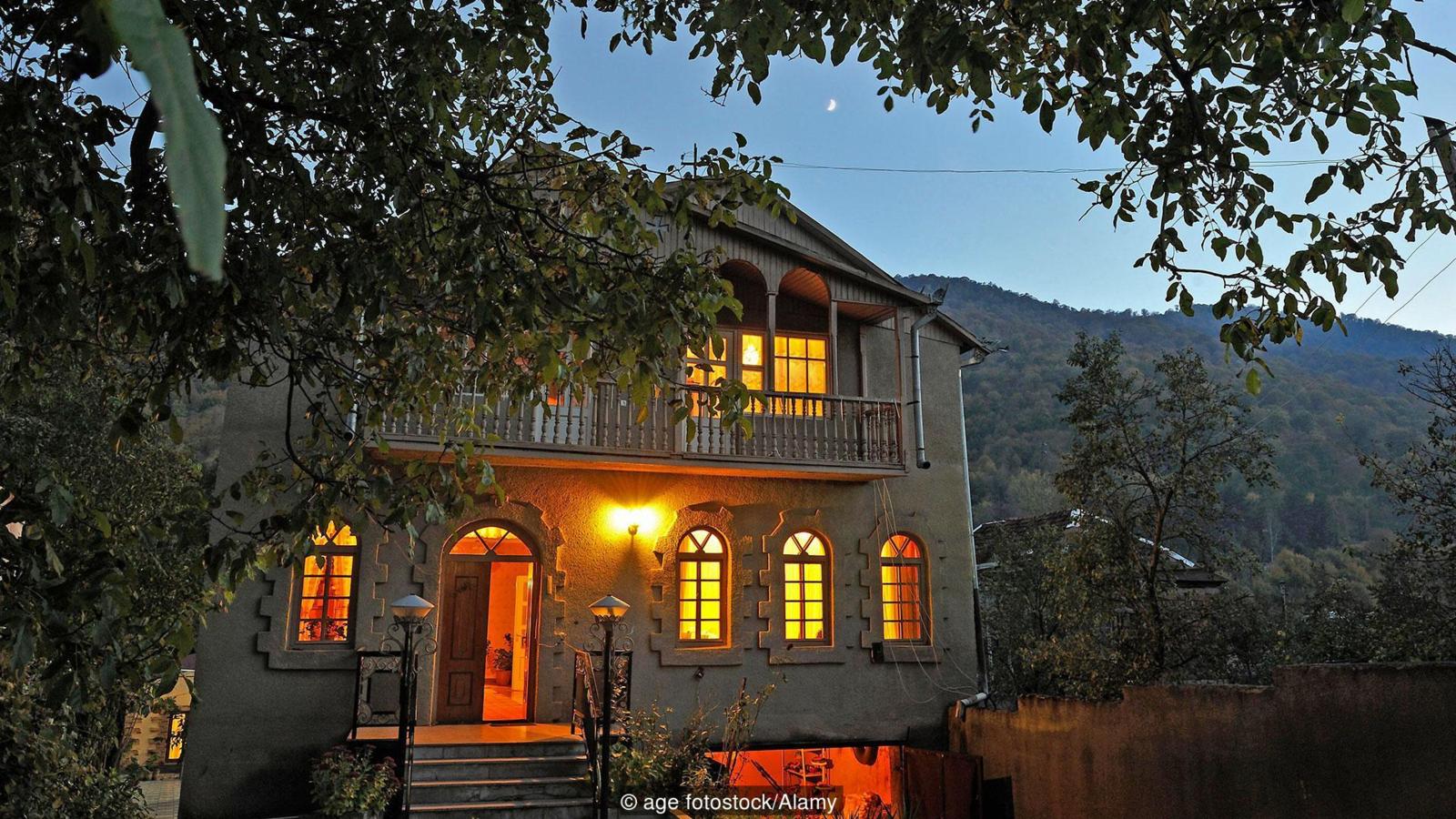 Only then did the extent of the family’s welcome sink in. I was a complete stranger from a country thousands of miles away. I’d turned up at their gate, unannounced, unshaven and barely an hour before a landmark family dinner, yet I’d not just been granted a bed but been ushered into the festivities as naturally and lavishly as if I’d been one of their own. It stretched the definition of ‘guesthouse’ to improbable extremes.

Armenians, like their Caucasus neighbours, have long been renowned for generosity to outsiders. The country’s location on the historical trade networks of the Silk Road is integral to this. The region has seen the passage of countless thousands of merchants, soldiers, migrants and wayfarers. As long ago as 400BC, the Greek general Xenophon brought his troops this way and gave accounts of tables groaning with lamb, poultry and barley wine.

It should perhaps be pointed out that the three Caucasus nations – Georgia, Armenia and Azerbaijan – retain a healthy suspicion of each other. There’s a wry Armenian joke that sums it up. A boy asks his grandfather why Armenia hasn't yet sent an astronaut to space. “Because the Georgians would die of envy," the grandfather replies. "And if the Georgians died of envy, then we'd die of pleasure – and the Azeris would be left with all the land." Towards travellers and outsiders, however, local hospitality throughout the region is astonishingly generous.

Armenia has known unspeakable pain and hardship, not least in the form of the deportations and deaths of up to 1.5 million of its people between 1914 and 1923. Dozens of US states and 29 countries have recognised this as an act of genocide by the Ottoman Empire. Today’s Turkish state denies the description. Armenia’s national psyche has, inevitably, been shaped by the period. And in so doing, the notion that those who come in peace should be welcomed with open arms has only been strengthened.

I can say this much: when you encounter hospitality in Armenia, you’re unlikely to forget it.