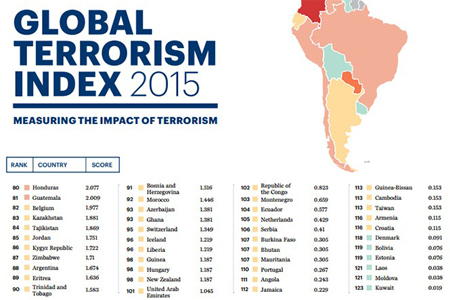 According to the 2015 Global Terrorism Index report, published by the Institute for Economics and Peace in London, Armenia is among the safest countries in terms of potential terrorist threats.

It comes 116th in the list of 162 states, where the first place belongs to the most dangerous country in terms of terrorism.

One of the sources of possible threat to Armenia is the participation of 70 Armenian fighters in the struggle with Syrian Kurds against ISIS, the report says.

Neighbors of Armenia - Azerbaijan and Georgia – came 93rd and 71st in the list respectively. Russia is in the 23rd place.

According to the report, the highest terrorist activity is concentrated in five countries — Iraq, Nigeria, Afghanistan, Pakistan and Syria. These countries accounted for overall 78 per cent of the lives lost in 2014 as a result of terror attacks. India, Somali, Libya and Thailand also appeared in the top ten.