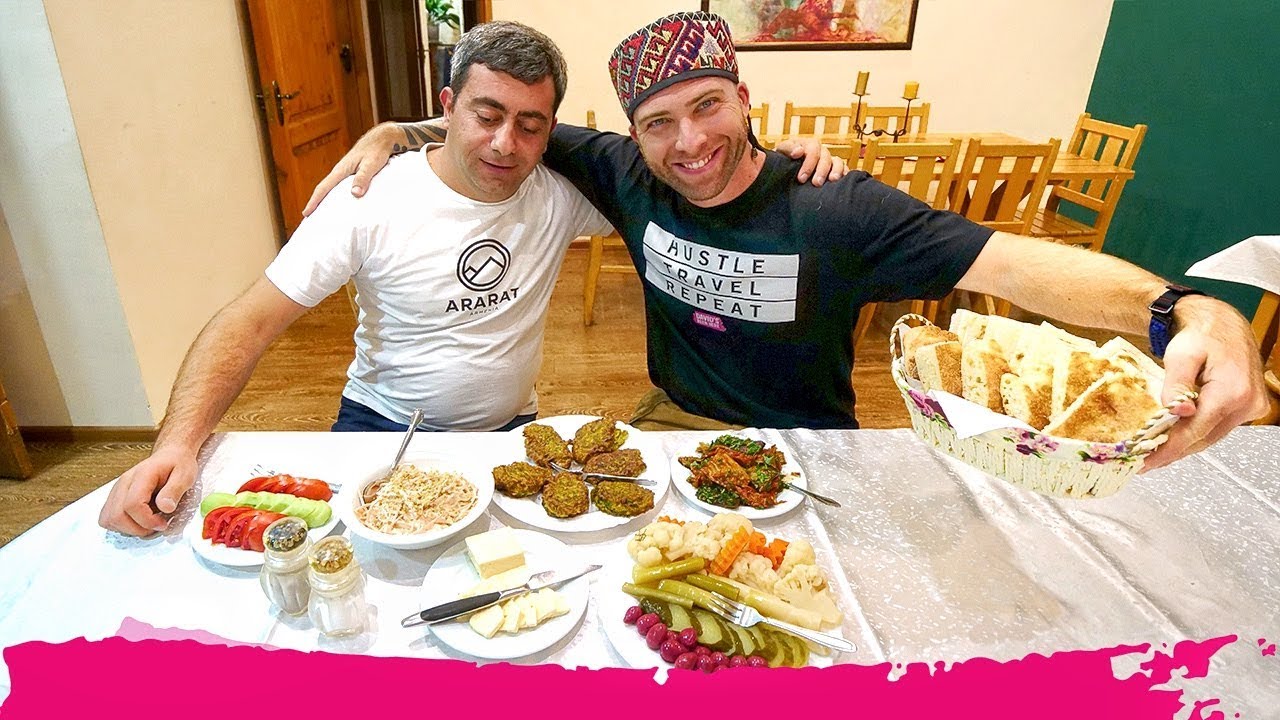 After exploring a medieval monastery at Lake Sevan, I began my evening with a drive to Dilijan. I’d be staying overnight at Daravand Guest House, which was about 30 minutes away! After 10 minutes, we entered a huge tunnel that’s 2.3 kilometers long. It passes through a mountain! On the other side of the tunnel is the Tavush Region of Armenia.

Dilijan is located in a national park. It’s a small community with a tiny town center. We arrived at the guest house and pulled into a dirt road. Inside the guest house was the restaurant. It was really nice! There, I met the owner, a really nice man who was like my Armenian grandfather!

The Daravand Guest House has nine rooms and a cottage. First, there is a terrace with three tables, including one long table. There’s also a couch where you can chill out. It’s very funky and rustic, with lots of wood everywhere. Further inside is a cozy lobby/bar, where I could see beer, brandy, and lots of other drinks.

Past the lobby is a dining room where we’d eat dinner later. There’s a wine case in the corner. I’d been to a few bed & breakfasts like this. They’re super relaxing and cozy and usually, the owner lives on the property. There’s writing all over the walls from other people who have stayed there. I’d have to write “David’s Been Here” on it later!

Then, if you follow the wooden stairs going up, you’ll see some antiques on the right, including a sewing machine, a typewriter, and some rugs. On the second floor are the 9 rooms.

My room was nice and cozy. It has a queen-sized bed and a twin bed. I also had a table, a closet, and a heater. It was on because it was a little nippy outside!

Back downstairs, it was time for dinner. I started with a white yogurt soup. It’s very light and contains greens. It’s like a hot tzatziki.

Next, I tried a carrot salad with walnuts. I had never had it before. It was crunchy, moist, and refreshing. It was like carrot spaghetti with walnuts and sour cream. Super delicious!

Then, I went with some roasted eggplant with red pepper and tomato sauce. Like other Armenian dishes, it doesn’t contain lots of spices, which allows the natural, delicious flavors to come through. Armenia has so many delicious eggplant dishes!

Then, I had the zucchini cutlet, which contains one egg to hold it together. It was a delicious veggie cutlet. After that were peppers stuffed with meat and cabbage dolmas! I’d never had a dolma like this. It had a different texture but was still so good! It was more filling because it was bigger.

Then, I had eggplant stuffed with beef while some homemade apricot vodka was brought to the table! The vodka was crazy strong! I had never had it before!

Then, I tried the cabbage dolma with the soup from earlier. Then, I dug into the fresh vegetables, including the cauliflower. It was really good! Thenm, we had some phenomenal Dargett barley wine.

Next was a stuffed tomato. It burst in my mouth and was super meat-heavy. Then, after dinner, Lusine and my driver played an Armenian board game that’s similar to chess. It’s a fast-paced game and I didn’t really get it.

I hope you enjoyed coming with me as I tasted homemade Armenian foods at the Daravand Guest House in Dilijan, Armenia! If you did, please give this video a thumbs up and leave a comment below. Also, please subscribe to my YouTube channel so you don’t miss any of my upcoming travel/food adventures!