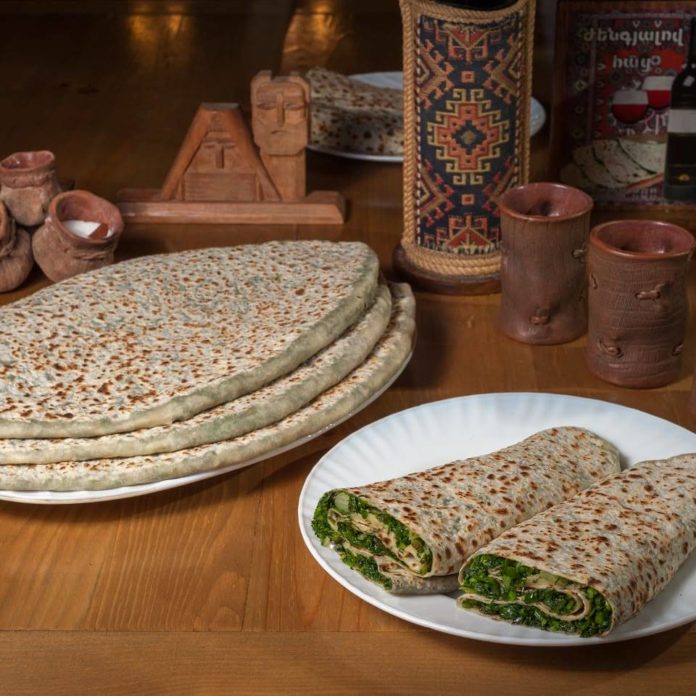 K’ndzmendzyuk, chercheruk, s’msemok, mokhratal are just a few of the over two dozen herbal plants, many of whose names are quite tough to pronounce, that the people of Artsakh (Nagorno-Karabakh Republic) use in baking the famous zhengyalov hatz. This delicious bread stuffed with local herbs is known as an authentic Artsakh food, although people of Syunik and some in the Tavush region also bake it.

Its increasing popularity has recently been evidenced by the opening of Zhengyalov Hatz restaurants in various places of Yerevan. Twice a major national US media outlet none other than the New York Times named zhengyalov hatz one of the best dishes of Los Angeles. “Zhengyalov Hatz,which opened in Glendale just last month, makes huge, juicy breads filled with chopped herbs and greens, cooking them to order all day so they’re hot,” NY Times’s Jill Cowan reported in the national mainstream newspaper. On January 1, the newspaper ran another story on zhengyal bread, calling it “the perfect snack.”

In Artsakh typically not just some but all restaurants serve zhengyal. You can also enjoy it at Stepanakert’s market where the Artsakhtsi women cook authentic rolls in front of the customer on traditional stoves called “sadj”. This organic and nutritious food is normally sold here for quite affordable prices.

One of the author’s video recordings done during the summer trip to Stepanakert depicts Artsakhtsi Donara Gasparyan, who is well-known for her delicious zengyalov hatz and has been interviewed on various occasions.