“There is a festival in Yerevan”. Thousands of citizens and guests of Yerevan took part in the first day celebration of “Erebuni-Yerevan 2797” 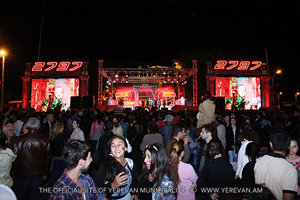 The first day of the two-day celebration of “Erebuni-Yerevan 2797” which is held under the motto ՞My warm and kind city՞ traditionally was over with the festive concert in the square adjacent to the historical and archaeological reserve-museum Erebuni.

The concert was called “There is a festival in Yerevan” involved performances of the popular singers. ՞Karin՞ ensemble of folk dances and songs was on the stage too.

The old and new songs dedicated to Yerevan prevailed at the concert. The concert was followed by the firework.