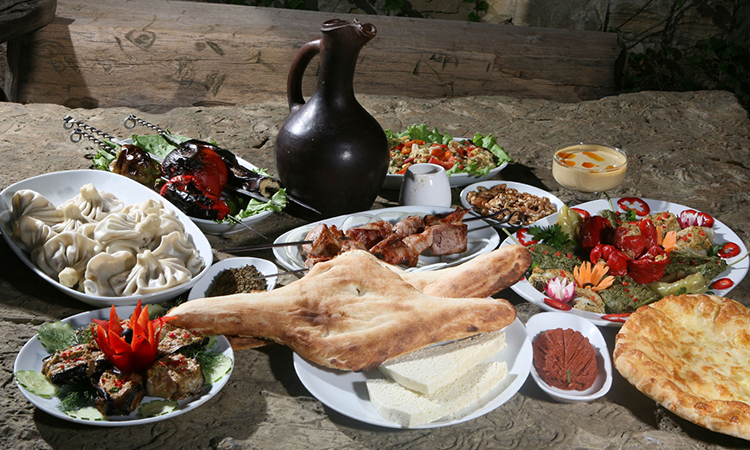 If you thought Georgia was just a state, you’re probably not terribly familiar with Armenia either. These two Eastern European nations, both former Soviet republics, border the Middle East and are packed with majestic landscapes from volcanoes and canyons to the snow-kissed peaks of the Caucasus Mountains, with picturesque villages punctuating the spaces between. The long history of the region is both complicated and inspiring, and their rich culinary heritage helps unravel the tales. Famous for flavorful spices complementing fresh ingredients, the traditional dishes of Georgia and Armenia are the perfect entrée into the culture of this undersung region, and an immersive culinary tour may be your best option for exploring new territory in delicious style.

When asked why food is an ideal means to discover the region, Neil Coletta of Food Tours at Intrepid Travel said,

While the landscapes, customs and cultures are reason enough to visit Armenia and Georgia, nowhere is the true character of the region more evident than in its distinctive food traditions. Whether you are a student of history, a lover of nature or are propelled around the globe by your appetite, the Caucasus, much like the traditional tables of their respective countries, have everything on offer: fresh produce; a balance of savory and sweet meat and grain-based dishes; and a deep, spiritual love of bread.”

Intrepid curates its own 10-day journey with the Armenia & Georgia Real Food Adventure tour, featuring the following culinary highlights to whet your appetites, both culinary and cultural.

If you’re gluten intolerant or lactose intolerant, go straight to number two. For the rest of you, few foods are as soul-warming as bread, and adding cheese is always a win, so get ready for khachapuri. Sometimes called cheese pie, this is typically bread with cheese in the center, bordered by a crust meant to be pulled apart and dipped in the gooey goodness within. There are lots of varieties, but Adjarian-style, with an egg in the middle, is the most typical. Attend a khachapuri cooking demonstration in Tbilisi, Georgia’s capital, and take the secrets of this treasure home with you. (Yes, you can eat them after the demonstration.)

Barbecue isn’t only for Texas. In Armenia, khorovats are big business. Theyr’e spiced and skewered meats, often pork, barbecued on a grill and served at family gatherings. Feast on khorovats at a quaint Armenian restaurant to experience this most traditional of local fare.

The Yerevan Brandy Company has been distilling Ararat brandy since 1887, using white grapes and spring water according to a traditional method that has remained largely unchanged through time. Take a guided tour of the factory (with tastings, of course) and visit its museum to understand just how legendary this brandy is, and how artisan their production remains, from barrels built on site to its distinctive glass bottles.

4. Wine and Dine Yourself, with Friends

Visit a famed winery and learn the difference between how Georgian wine is made and bottled versus how the rest of the world does it. Indulge in a carefully curated wine and cheese pairing, then visit a local farm for a proper meal with the family (there will be more wine, of course). The entire meal is farm-to-table to the extreme with all ingredients sourced directly from the property, including the wine grapes.

5. Chow Down on Chicken Stew

Originally prepared with (and named for) pheasant, chakhokhbili is a chicken stew beloved by Georgians. Think of it as the chicken noodle soup of Georgia. Visit a family in Tbilisi to make this stew together, and master the recipes of several other traditional dishes, too. After all the work is done, there’s nothing left to do but reap the rewards of your labor and feast on your creations.