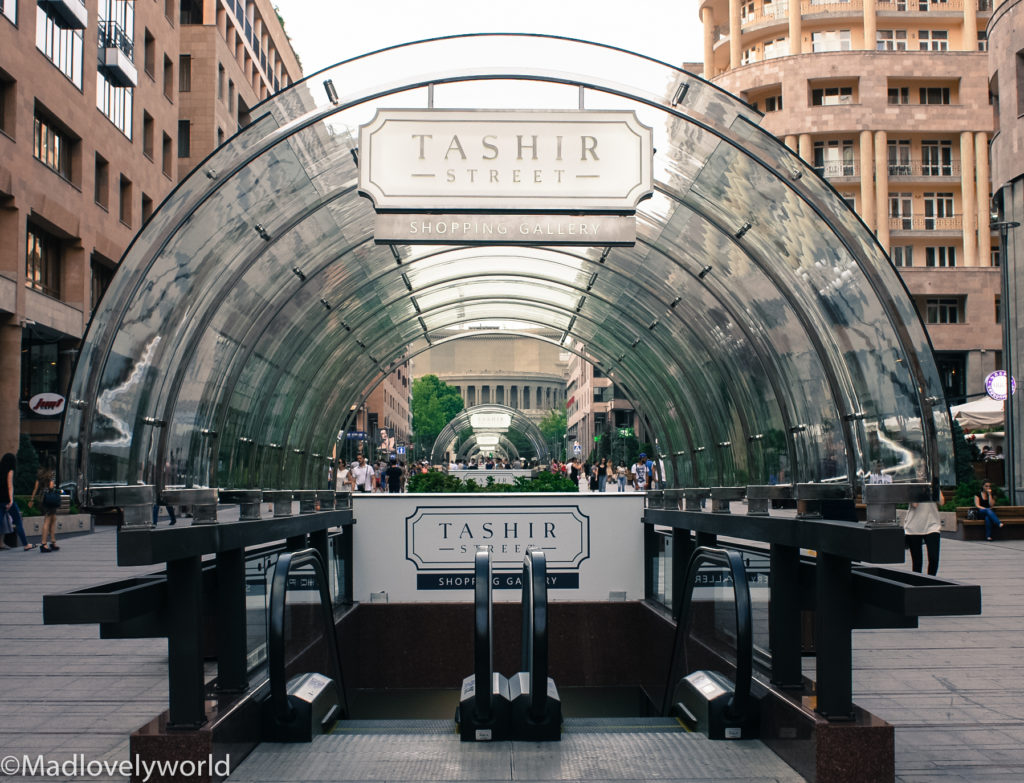 Why Armenia? We think this country is not very well known certainly there isn´t tourism yet.

That was one of the reason we decided it to go check it out. Armenia is somewhere between Asia and Europe. The official language is Armenian, one of the oldest languages in the world and the second language is of course Russian. The oldest Christian country was surprising us a lot, especially because of the incredible landscape and the people and the food everywhere was awesome!!!!

Yerevan the capital of Armenia belongs to one of the oldest cities in the whole world, but honestly that is hard to believe. Outside of the city are a lot of unfinished buildings without any energy and water supply. But the centre is really nice with a lot of amazing buildings. The city has a lot of great and very magnificent old buildings, still from the former Soviet time. Like the beautiful opera or the amazing Republic Square, during the summer you can enjoy every day from 8 p.m. – 11 p.m. a lot of water fountains in the combination with a great light show!!!!! It is really a spectacular event and worth it to go there in the evening, for example first you hear the sound of Beethoven and then Mozart!!

Especially Yerevan has a lot of great cafés and restaurants. The quality of the food is incredible good everywhere you go!!!! It was always a pretty hard decision to choose where to go!!!! The menus in all restaurants had such a huge choice of food and drinks. The city has no real Starbucks, but a pretty awesome mobile small coffee shop which is selling Starbucks products and we think you can get the most delicious Frappuccino’s and Smoothies … so great !

Zsitsernakaberd Memorial and the eternal flame 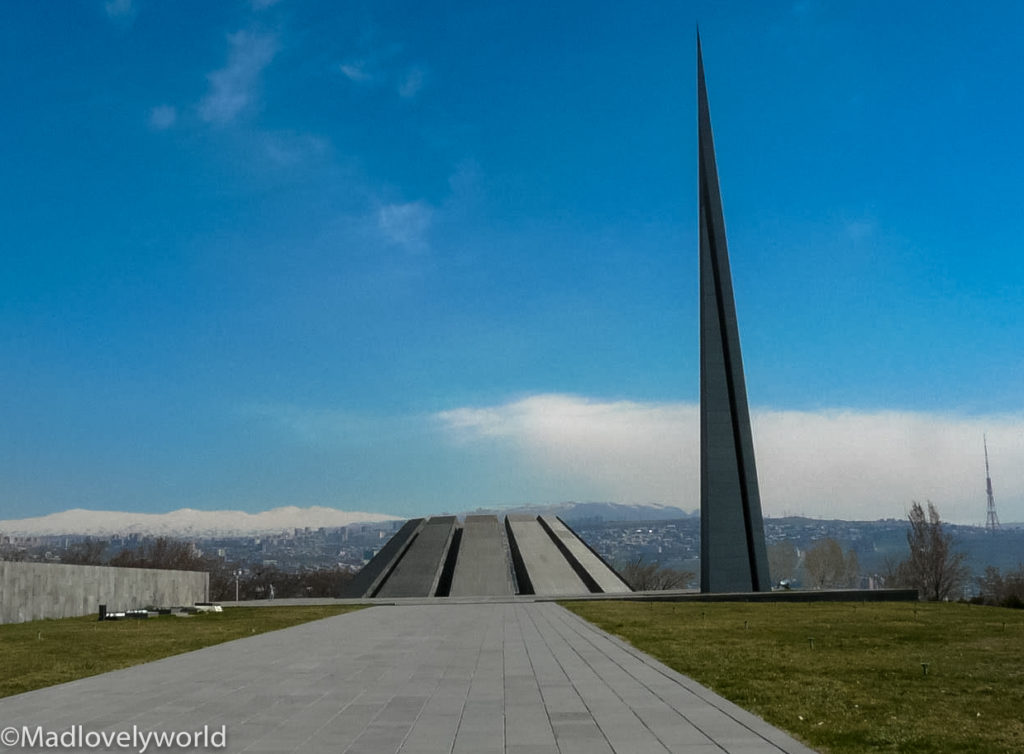 A memorial for the genocide of the Armenian population in the year 1915.

Every year on the 24th of April is the memorial day taking part, approximately 2 million Armenian pilgrims are going to the memorial place and remember to the 1,5 million victims. 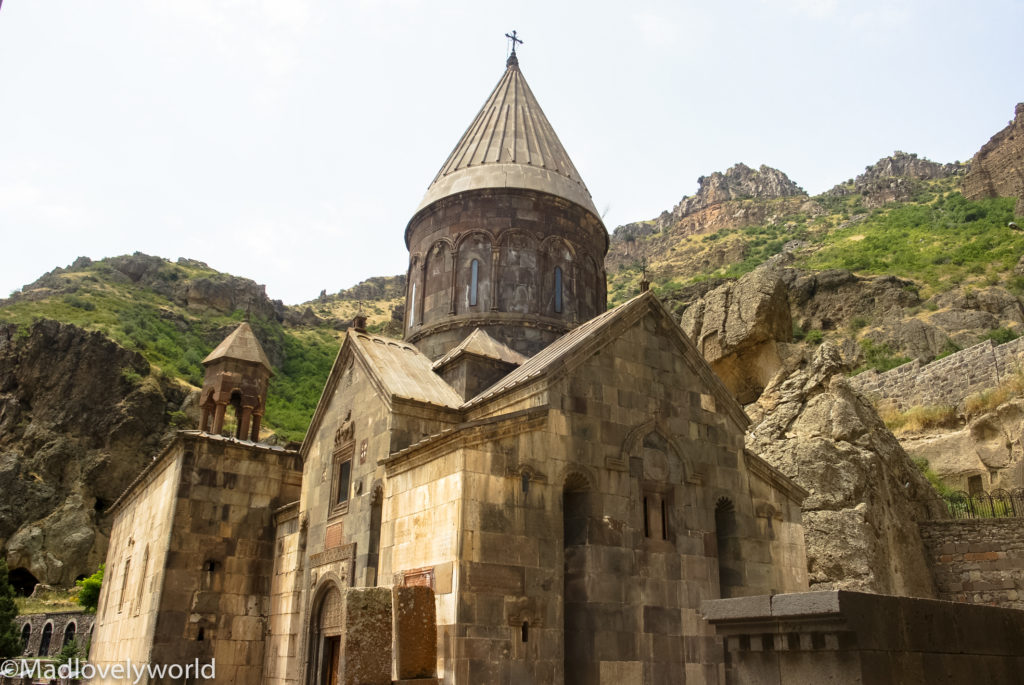 We saw many travel reports with a lot of pictures from the typical Christian churches in Armenia and of course we were looking forward to see them all. We started with a monastery complex which is impressively build in a rock outside of Yerevan. The beautiful church was discovered in the 13 th century. Nowadays there are a couple of buildings they were used for monks and even as an economical complex. Inside of the monastery we could admire the holy water, which is coming out of a spring. A lot of religious people were drinking the water and using it to clean their body. We were using it only for cooling, because it was soo hot. The most incredible experience is definitely the view of the areas. For example, the humongous cross built into the hill site right next to the old church. 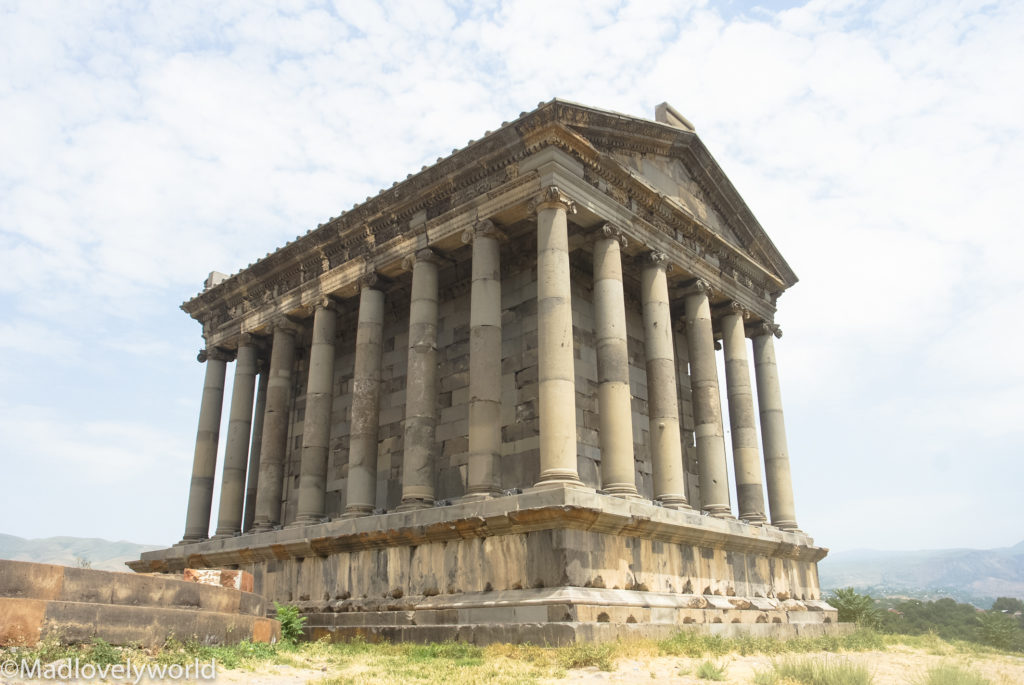 The Garni temple is the most visited place in Armenia. The temple is located close to a deep canyon and of course it was on our agenda as well, to visit the temple!!!

The surrounding area and there views are amazing!!

The sun temple seems a little bit unattractive and small, but on the other hand it has amazing energy. At the entrance local women offering delicious food, like walnuts or sweet bread dipped in honey.

In front of the temple we saw a little bath house, which was closed, Vrezh told us because of safety reasons. Probably it was built in the third century after the Roman idol!

Echmiadzin, also called small Vatican, is the centre of the Armenian church. Inside of this modern complex you can find a library, a print office where they were printing bibles. They also had a candle factory and even a cathedral which was discovered in the 4th century and they were just restoring it !!!In front of the entrance we could see the graves, where the spiritual heads of the church were buried. 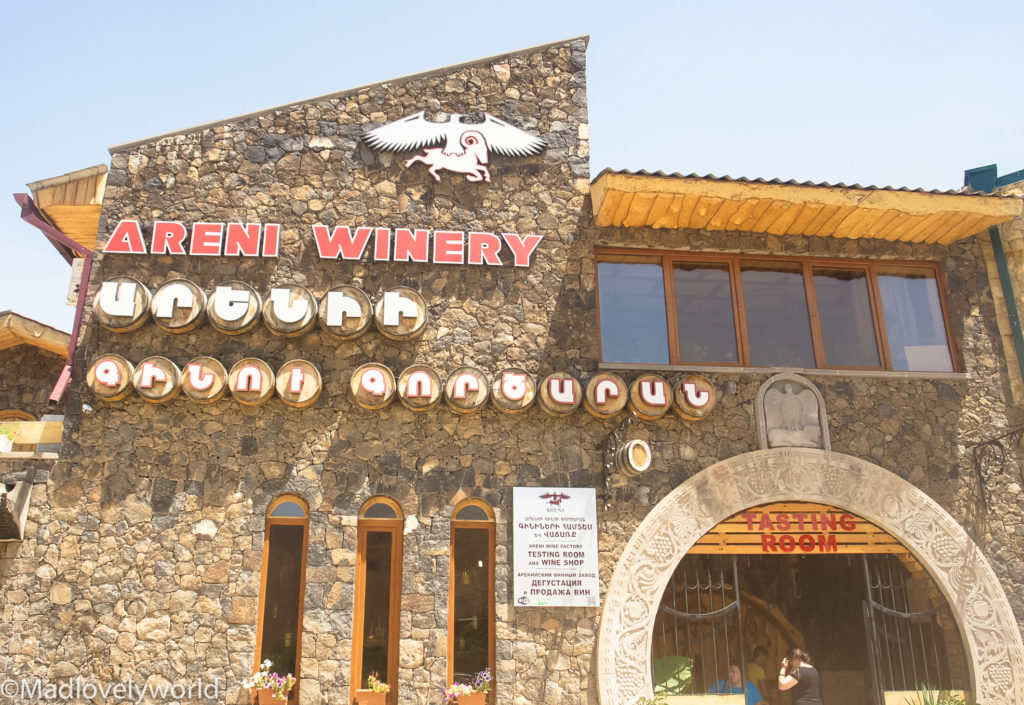 The wine is the oldest and most famous alcoholic beverage in Armenia. The oldest wine cellars are around 6100 years old, we think that’s really incredible .. We were impressed as we saw so many old wine bottles. They were stored in a large warehouse for many decades and getting riper and riper every year. The most famous wine called “Karas”. They were growing this terrific wine in the whole country and you can get Karas as a white, red and rose wine!! They were explaining to us exactly how the wine production works and we were visiting the whole Areni Winery. For sure we tried nearly every single wine!!!!!!

The taste of all wines were really great and the choice is gigantic!!!!

We also tried different types of Vodka with different fruit flavours like peach, cherry and blueberry. So you will be hammered by the time you leave.

Fortunately, nobody had to drive and so we tried everything. After every glass we got a small piece of goat cheese to neutralize our flavour. After we finished our big wine and whiskey testing, we had great cup of coffee and tea.

We can highly recommend this factory! It is really worth to visit the Areni Winery, again thanks a lot for the nice afternoon!! 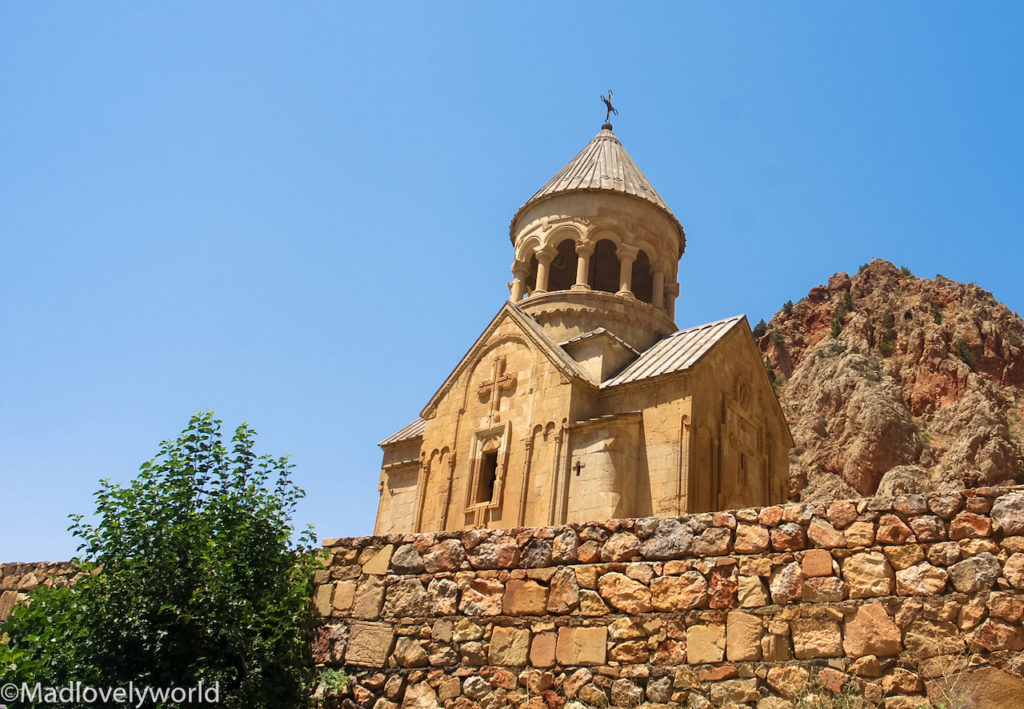 The Noravank monastery also 13th century is located at the edge of a canyon of the Amaghu and is one of the most beautiful monasteries of Armenia. The Sun is reflecting of the rocks, so that the whole complex appears to be blood red.

Unfortunately, the monastery has been destroyed by an earthquake in the year 1840, but they were rebuilding and restoring it in an incredibly nice way. 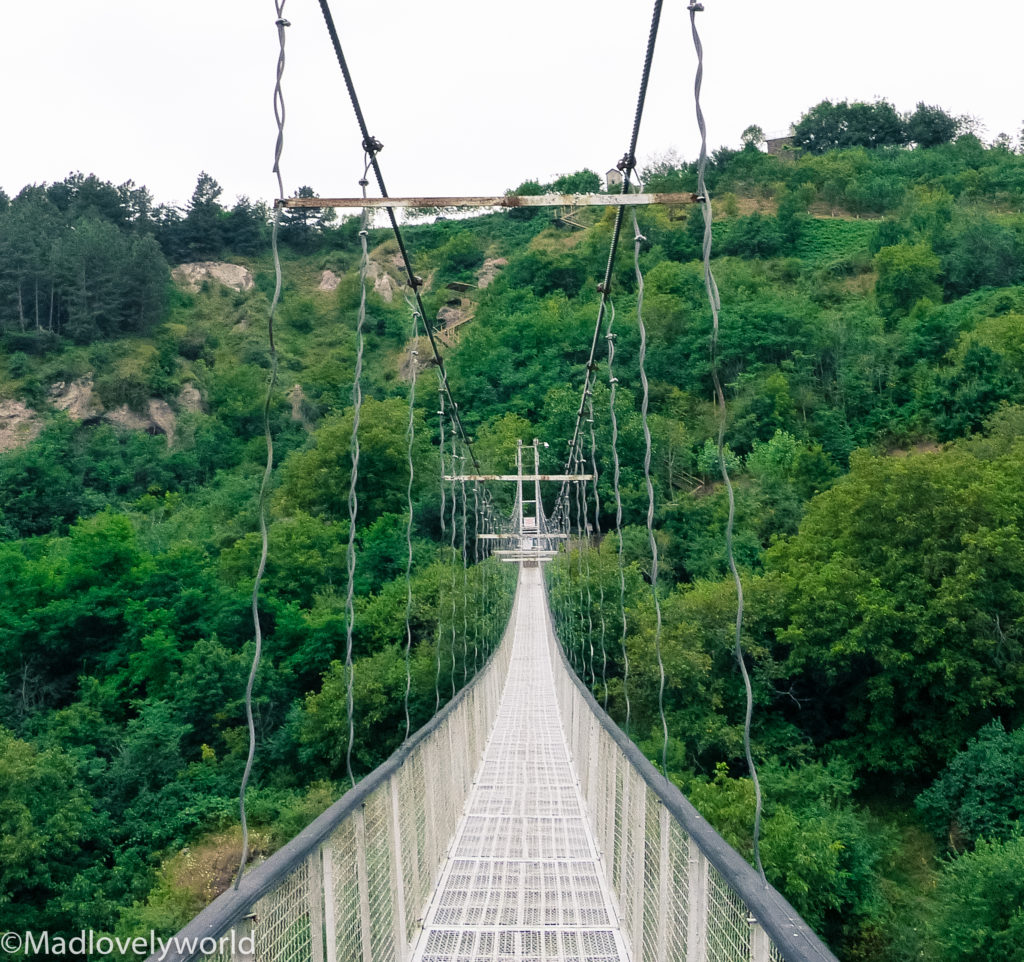 Khndzorek which is a really a nice cave town where people were living till 1960 in approximately 400 small “cave apartments”. They were arising out of a soft chalkstone. Nowadays they are using the caves as stables. We reached the cave town village over a huge hanging bridge. This area is also cool for hiking. It is incredible that people were living there not so long ago. This experience was definitely in our list of a real adventure.

Wings of Tatev- the longest cable car in the world 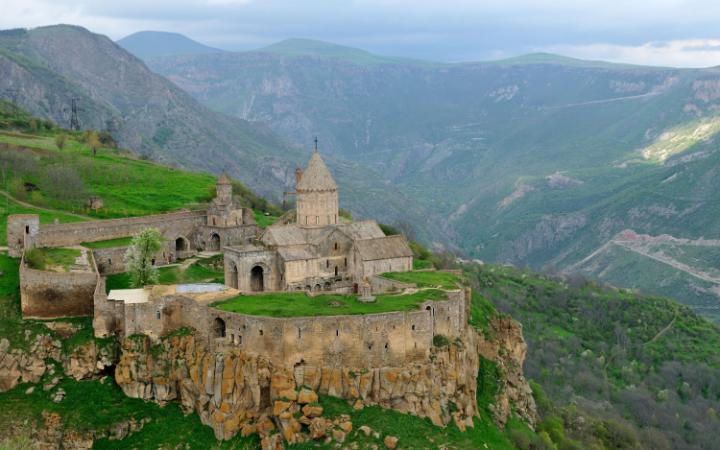 After our trip through cave town were heading to Halidsor, in this city you can find the longest cable car in the world. A gigantic project which was built by a Swiss company and of course it is listed in the Guinness book of records!!The cable car is connecting Tatev with Halidsort. For the inhabitants of the villages it is free of charge to use the cable car once a day. Visitors have to pay approximately 10 € for a return ticket!! The gondola is passing two valleys and needs 11 minutes. After you leave the village, it is worth to have a cup of coffee in the modern and quite nice Armenian restaurant located next to the cable car.

Then we reached the other side called Tatev, we walked up the hill. From this hill you have an amazing view and we could take the most incredible pictures. Thank you so much Vrezh !!! This church got also destroyed by the earthquake, but the government spent a lot of money to restore it. Inside the church it is a bit like a museum. We could admire how complex it is to produce cooking oil and see where the monks were living together with the animals. The whole complex housed in total more than 2000 monks!!!!!!