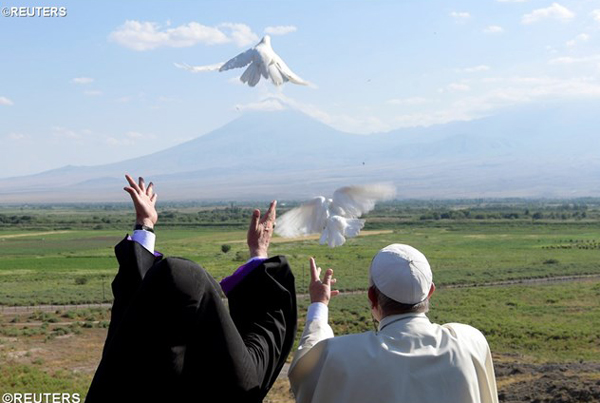 During his flight from Armenia to Rome on Sunday, Pope Francis gave a press conference to the assembled journalists aboard the papal plane. He reflected on his three-day trip to Armenia, his upcoming trips to Azerbaijan and Poland, the role of the Pope emeritus, Christian unity, and the reformation.

He also addressed Brexit, the idea of deaconesses, and how the Church might apologize for unjust discrimination toward homosexual persons.

Please find below the text of the press conference, translated by Catholic News Agency:

Artur Grygorian (Armenian Public Television): Your Holiness, it is known you have Armenian friends, you had contacts with the Armenian community earlier in Argentina. During the last three days you touched the Armenian spirit. What are your feelings, impressions? And what will be your message for the future, your prayers for Armenia? Thanks.

Pope Francis: Well, let’s think to the future and then let’s go to the past. I hope for justice and peace for this people and I pray for this, because it is a courageous people. And I pray that they find justice and peace. I know that so many are working for this; and also I was very happy last week when I saw a photograph of President Putin with the two Armenian and Azerbaijani presidents… at least they’re speaking! And also with Turkey and the president of the republic in his welcoming speech spoke clearly, he had the courage to say: let’s come to an agreement, forgive each other, and look to the future. And this is a great courage for a people who has suffered so much, no? It’s the icon of the Armenian people. This came to me today while I was praying a bit. It’s a life of stone and a tenderness of a mother. It has carried crosses, but stone crosses - and you see them, eh! - but it has not lost its tenderness, art, music, those “suspended chords”, so difficult to understand and with great geniality. A people who has suffered so much in its history and only the faith has kept it on its feet, because the fact is that it was the first Christian nation, this isn’t sufficient! It was the first Christian nation because the Lord blessed it, because it had the saints, it had bishop saints, martyrs, and for this in resisting Armenia has made itself a “stony skin”, let’s call it that, but it has not lost the tenderness of a maternal heart. Armenia is also a mother!

And this is the second question, let’s go to the first now. If I had so many contacts with the Armenians… I went often with them to Masses, I have many Armenian friends… One thing that I usually don’t like to do for rest, but I would go to dinner with them and you have heavy dinners, eh! But, very good friends, no? A very good friend is Archbishop Kissag Mouradian and Boghossian, a Catholic… but among you, more important than belonging to the Apostolic Church or the Catholic Church, is the “Armenism”, and I understood this in those times. Today, an Argentinean from an Armenian family that when I went to the Masses, the archbishop always made him sit next to me so he could explain some ceremonies or some words that I didn’t know greeted me. One, two and three, but I start with three.