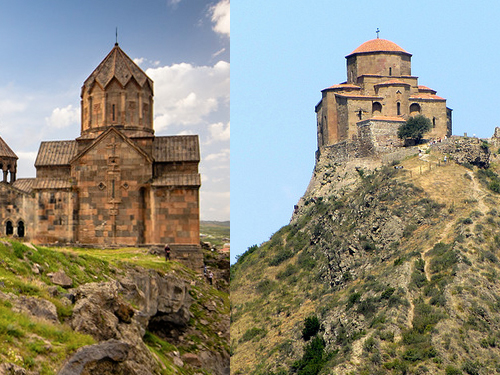 Dear friends, this is for those who like to travel. You have an amazing opportunity to visit 2 unique Caucasian countries within a week. "Explorearmenia" tour operator offers you tour package Armenia & Georgia - 2 Christian capitals: Yerevan + Tbilisi. Each country promises unspoilt travel and adventure.

During the tour of Armenia and Georgia, you will see the uniqueness of nature and landscapes, an abundance of stunning architectural monuments, try national cuisine and get acquainted with the life of local residents.

The tour package of Georgia and Armenia includes everything: UNESCO world heritage sites, monasteries and ancient cities, wine and cognac regions. We have selected the most interesting places and prepared a very interesting program. A tour of Armenia and Georgia will leave a trace of incredible beauty in your heart, which will repeatedly beckon you to return.

The program of the tour to Armenia & Georgia, 2 capitals: Yerevan + Tbilisi (7 day/ 6 night)

Arrival in Yerevan. The tour in Armenia will start with a visit the city of Echmiadzin - the center of the Armenian Gregorian Church, where the residence of the Catholicos is located. We will visit Echmiadzin Cathedral (301-483 AD), which is included in the UNESCO World Heritage list, the museum.

If you wish (for extra payment) we will visit Yerevan Brandy Factory, where we have a fascinating tour with tasting of 2 types of brandies (a three-year old "Ararat" and a ten-year old "Akhtamar"). (Extra charge - $ 10 per person).

Transfer to the hotel. Accommodation.

After little rest - a walking tour through the city. Yerevan architecture is original and distinctive. Today, Yerevan is a city where there are a variety of architectural styles, with green alleys, numerous fountains.

You will be able to see the sights in Yerevan: Grand Cascade (open air museum), the square of ​​France, the Opera and Ballet House, Northern Avenue, the Republic Square

Visit the Institute of Ancient Manuscripts named after St. Mesrop Mashtots - Matenadaran. The most ancient manuscripts are dated back to the 5th century BC and are associated with Mesrop Mashtots, who invented the Armenian alphabet. (Extra charge - $ 3 per person).

Afterwards we visit the pagan temple of Garni, built in the I century by Armenian king Trdat I and dedicated to the god of sun Mihr. According to history, the temple was built on the money of the Roman Emperor Nero. Azat River Gorge is famous for its basaltic pillars - the result of a volcanic lava flow.

Next stop is Gegard monastery complex (IV century), which is included in the list of World Cultural Heritage by the UNESCO. Its full name is Gegardavank, literally it is translated as "Monastery of the spear." The name of the monastery complex comes from Christ Spear (Spear of Longinus), which the Roman soldier Longinus thrust in Jesus Christ. The spear is now kept in the museum of Echmiadzin Cathedral.

After breakfast, we go to the Armenian monastery of Khor Virap, situated at the foot of Mount Ararat, near the border with Turkey. It is a place of pilgrimage, which is connected with the legend of Gregory the Illuminator (Grigor the Illuminator). According to church tradition, Gregory was imprisoned on the orders of King Trdat III, caught in that he professes Christianity, and was held there for 13years. Those interested can go down to the prison, which has a depth of 6 m and a diameter of 4.4 m.

Right in front of you, very, very close and in all its beauty you will see the symbol of Armenia - Mount Ararat.

After we will visit "Areni" wine factory and taste Armenian wine in the tasting room of the factory. The wines of this producer differ in their unique tastes. The bouquet of the fragrance is revealed gradually leaving a pleasant aftertaste.

Next stop is Noravank monastery complex, built in XIII-XIV centuries, which is located  1.5 kilometers east to the village of Areni. The complex is located on a narrow ledge winding gorge tributary of the Arpa River. The gorge is famous for its steep red cliffs, towering behind the monastery.

After breakfast, we continue the tour to the pearl of Armenia - blue Sevan. Lake Sevan is a freshwater lake in the Armenian highlands. It is the largest lake in the Caucasus. It is guaranteed to be the largest source of fresh water in the region. We will also visit the Sevanavanq - a monastery in the north-west coast of Lake Sevan. The monastery is located on a peninsula, which was once a small island.

We continue our tour to Tavush region of Armenia – to a small town of Dilijan, located on the picturesque banks of the river Aghstev.

The next stop will be Haghartsin Monastery, which was built in the X-XIII centuries, mostly under the auspices of the Bagratuni Dynasty. We will also visit Goshavank - monastery complex, built in XII-XIII centuries in the village of Gosh in Armenia. Goshavank is the cultural, educational and religious center of medieval Armenia. The sources referred to it as a seminary, university, and so on.

Trip to Tbilisi. Arrival and Meeting in Georgian border.

Hotel accommodation in the hotel in Tbilisi.

Breakfast in the hotel. Today we will have a full day of adventure. After all, our program is full of historical sights. We will visit the first capital of Georgia, the world-famous city of Mtskheta – one of the favorite places of the local population.

In Mtskheta acquaintance with the main Orthodox Georgian churches:
•    Cathedral Svetitskhoveli built on site where the first Christian church of Twelve Apostle was founded in XI century.
•   Samtavro-Church of Transfiguration complex and St. Nino Charm of naturenunnery.
•    Stop on the top of mountain, at confluence of Aragvi and Mtkvari, where is one of magnificent Georgian architecture monument – Jvari Monastery (translated as a cross)

After Mtskheta we will visit one of the rarest monuments all over the world – ancient Uplistsikhe cave town, carved into volcanic rocks of Kvernaki edge. First was mentioned in I century BC chronicle and reached its heyday by IX-X centuries. City fascinates with its unusual appearance.

Overnight in the hotel in Tbilisi.

Transfer to the airport.

Prices on tour in Armenia & Georgia (price per person)