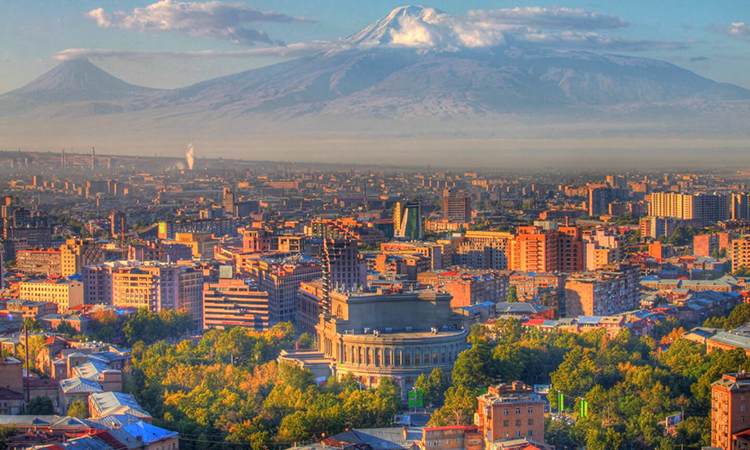 The Pink City of Yerevan: Armenia promoted on Ryanair website

The Armenian capital is quickly becoming one of Europe’s must-see destinations, Rynair, Europe’s No.1 airline, says in a post on its official website. “Walking through the lamplit streets of Armenia’s enchanting capital, the first thing that strikes you is the city’s unique colours. Buildings covered in bright pink and dusty brown melt together as you mosey around, a fitting contrast of old and new. Nicknamed ‘The Pink City’, shops and café’s left and right are made from ancient volcanic stone that gives Yerevan an intriguing glow,” the article reads.

According to the post, Armenia is a growing tourist hot spot that has something for everyone (families, solo travelers, college students, adventure seekers), with its historic sites, exciting culture, extreme sports and thriving nightlife.

It then introduces readers to the 572-step Cascade that overlooks the city, the History Museum of Armenia (home to the world’s oldest shoe, which is 5,500 years old), the Cafesjian Center for the Arts, which houses an array of fascinating paintings and contemporary art displays, the Photo Atelier Marashlyan dress-making boutique, where one can enjoy a personalized photo shoot wearing late 19th century Armenian outfits, as well as to numerous restaurants and hotels.

“Armenia is a country with a fascinating history and this is clear to see when we enter the halls of the Matenadaran, which is one of the oldest and richest book-depositories in the world. The depository contains over 17,300 manuscripts, 450,000 archive documents and 3,000 ancient books written in Armenian, Greek, Latin, Aramaic, Hebrew, Arabic, Persian, Old Slavonic, Ethiopic and Japanese,” the article notes.

The airline highlights that almost two million tourists visited Armenia last year alone and Yerevan is finally emerging as one of the most exciting cities for European travelers to come and see.