What makes Armenia a dream destination? 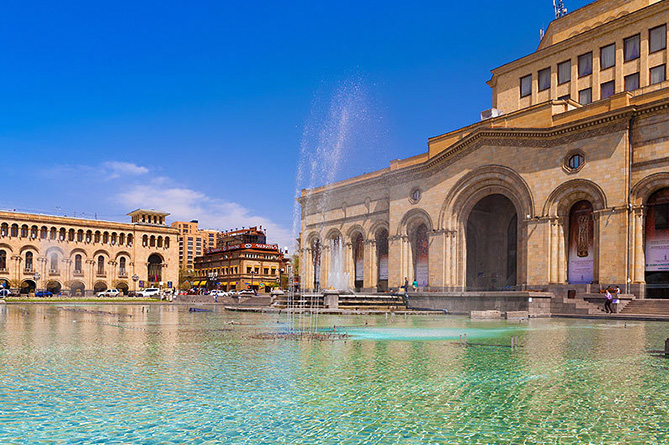 Sun-kissed vineyards, awe-inspiring peaks of Mount Ararat and the gorgeous waterfalls. every aspect of Armenia is, well, Insta-worthy. Sandwiched between Turkey, Iran and Azerbaijan, the country of three million people boasts of a kaleidoscopic culture, flavourful cuisine and an eventful history fraught with bloody conquests and political upheavals. From Alexander the Great's expeditions to invasions by the Roman legions, the Iranians and the Ottomans, the intrepid Armenians have witnessed it all.

Having lost their land in the eleventh century to the invading Tatars and Seljuks, the Armenians built a new kingdom farther south and west, in Cilicia, that flourished until 1375, playing a significant role during the crusades. Cut to 20th century, the republic finally gained independence in 1991 after seven decades of Soviet rule.

The inimitable charm of the mountains and its ancient Christian heritage (it was one of the first countries to embrace Christianity in 301 AD) combine to make the country a great tourism destination. Tourism has been increasing at a staggering rate of 25 per cent per year, buoyed by infrastructural development. New airports, roads, hotels and eateries are mushrooming, giving the country a cosmopolitan feel.

The capital city of Yerevan, that boasts of a population of little over a million people, is fascinating because it marries the modern with the medieval, the quaint with the contemporary. Elegant Neolithic buildings stand alongside small cafes and bars. Public installations, street art-splashed alleys, graffiti-laden walls, statuesque buildings hewn from pink tuff (rock formed from the debris of erupting volcanoes) add further to the allure of Armenia.

At the heart of Yerevan is Cascades, a contemporary art museum and sculpture garden, built at a cost of a whopping 20 million pounds by American-Armenian Gerard Cafesjian. Upon entering, you can spot abstract bronze figures as well as merrily obese cats that, as a placard explains, symbolise the "beginning of a new era of cultural resurrection and progress of the Armenian people".

As you look at the elegant buildings hewn from tuff volcanic rocks, you begin to realise why Armenia has earned the distinction of Ayastan or stone country. The stony soil, the jags of surrounding ridges and the outlines of architectural monuments coalesce to form a bewitching landscape. Unsurprisingly, the most iconic image of Armenia - present in everything, from its coat of arms to the souvenir T-shirts - is Mount Ararat. Though the mountain actually lies within the modern borders of Turkey, it is visible from most parts of Armenia. Over the years, it has left an imprint on the collective Armenian imagination.

The Ararat mountains form a stunning backdrop for the monastery of Khor Virap, meaning 'deep dungeon'. Story goes that St Gregory the Illuminator, who brought Christianity to Armenia, was incarcerated in the monastery for 12 years by a pagan king.

Armenia is often called an open air museum. And for good reason. The Hellenic-style temple of Garni and the monastery at Geghard, both located in the foothills of the Geghama Range, astound with their intricate craftsmanship. According to a legend, when Christianity was being introduced in Armenia, all pagan temples were razed and replaced with churches. Garni, thought to be too precious to be ravaged, was left untouched. Instead, a church was built right next to it. Today, it is the only remaining pagan temple in the whole of Armenia.

Centuries before Turkish or Soviet intrusions, Armenia was on a key Silk Road route (an old network of trade routes), resulting in a vibrant culture that is so central to the ethos of the country. The vibrant eclecticism is evident in the Armenian cuisine as well, which largely comprises succulent meats (Mongolian influence is evident here), fresh salads (inspired by Turkey), cheeses (drawing from Greek palate) and oven-warm flatbreads called lavash (an Arabic staple). The traditional Harissa, a velvety wheat grain and lamb dish simmered for hours over low heat, commands its own popularity. Barbecued meats cooked to a gossamer gold and vegetables also rule the dinner tables. The pomegranate, with its symbolic association with fertility, is the national fruit.

As I engaged with the locals while travelling through the lush mountain bowls of the Caucasus range, the barriers of language seemed to disappear as they began to express their love for Bollywood, the Indian movie industry. "Mera joota hai Japani." sang a couple of teenagers in accented Hindi when they realised I was an Indian. "You know Mithun (Chakraborty)?" inquired another group before breaking into "Jimmy, Jimmy, Jimmy", a chartbuster from one of the Indian actor's films.

On the last day of my visit, as I drove through the spectacular Syunik region in south Armenia, an elderly couple selling honey on the roadside captured my attention. I stopped to purchase a bottle, but as I pulled out my drams to pay them, they refused to accept money. Instead, they asked me to take their photograph.

As the duo sat there hand-in-hand, leaning into each other with the magnificent view of Mount Ararat behind them, they pretty much encapsulated the genuinely warm spirit of Armenia and its people.