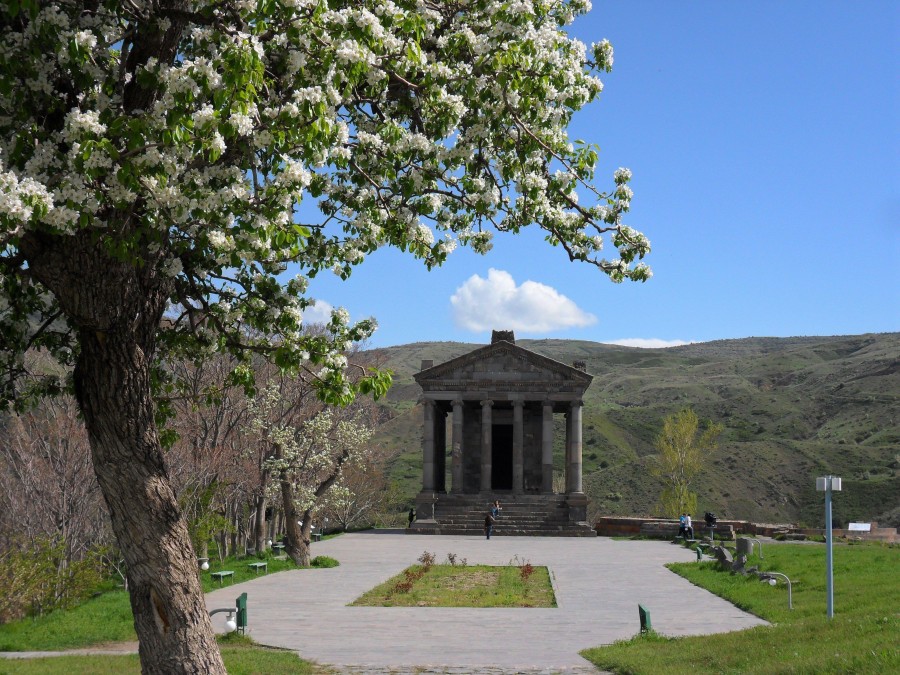 It’s mid afternoon in a mountain village close to the Azerbaijan border and the air is thick with the smoke of a dozen chargrill barbecues. Men are turning giant skewers of chicken and lamb on the coals while their obedient sons fan the flames, dressed in traditional Armenian costume.

High above the gorge the sun is pouring down from a cloudless sky and beyond the river bridge there’s dancing: troupes of young men and women, linking arms, kicking their legs and singing in unison as wild music blares out from speakers beneath the chestnut trees.

On the trestle tables there are baskets overflowing with freshly picked fruit and bottles stacked up high, filled with a dark red liquid. It’s semi-sweet wine from the areni grape because today, October 1, is the annual Areni wine festival.

You know you’re in wine country the moment you arrive at Yerevan airport. You can’t really miss it as there’s a 20ft high inflatable wine bottle parked outside the terminal.

A Christian country sandwiched between predominantly Muslim Turkey, Iran and Azerbaijan, Armenia likes its alcohol. They also produce what they say is the best brandy in the world and driving into town the advertisements are everywhere for Ararat brandy and Noy cognac.

My driver deposits me at the quaint Villa Delenda, one of the few surviving relics of 19th-century town houses in the capital, Yerevan. Outside its ivy-covered walls stone bollards line the cobbled pavement, stencilled with a Kalashnikov assault rifle and the words “Defend Yerevan”.

Was this, I wondered, a reference to the deadly on-off conflict with Azerbaijan over the disputed Nagorno-Karabakh region? No, says Maryam, one of the girls who run the villa as a guesthouse, with part of the proceeds going to charity. It’s a campaign to stop the developers from bulldozing the last of Yerevan’s historic buildings.

Inside the villa its all woven carpets, wooden floorboards and exquisite locally-made ceramics which they sell from a shop in the basement. A kindly old woman bustles around me, speaking only Russian. It’s late and the staff have gone home but she fetches me a bowl of potato soup, floating with mushrooms and herbs, and stands, arms folded, to watch appreciatively as I wolf it down with hunks of bread.

She tells me her name is Amelia and I wish I had enough Russian to ask her about her life. I put her age at about 75, meaning she would have lived two thirds of her life in the USSR, when Armenia was part of the Soviet Union, before it disintegrated in 1991 and Armenia became an independent country.

Despite the developers, Yerevan is a delightful capital. Its wide, leafy boulevards are lined with cafés and wine bars where Armenians like to sit chatting late into the night.

People here still talk about the recent visit of the world’s most famous living Armenian, Kim Kardashian, when her husband, the singer Kanye West, jumped into a fountain after a concert and invited the crowd to join him.

Armenians from the large overseas diaspora who visit for the first time are said to be pleasantly surprised by how modern, safe and civilised Yerevan is, and then rudely disappointed to find the suburbs and roadsides littered with the hangover detritus of the failed Soviet economy.

Driving out of the capital on my first morning, two things are immediately apparent. The abandoned, derelict factory buildings and the grim, Russian dormitory blocks surrounded by empty carcasses of old vehicles, rusting oil tanks and decrepit machinery overgrown with weeds. Armenia needs a clean-up.

But then you look up to the horizon and there, towering over everything, is the magnificent, awe-inspiring snow-capped peak of Mount Ararat, 5,165 metres high and just across the border in Turkey. “It used to be ours,” lament Armenians.

The mountain, together with its smaller sister, Little Ararat, form a stunning backdrop for the monastery of Khor Virap, meaning “Deep Dungeon”. This hilltop fortress is allegedly where St. Gregory the Illuminator was incarcerated for 12 years by a pagan king who was then cursed by sprouting the head of a boar. On a more practical note, my advice would be to get there early to beat the coach tours.

We drive on, to two more jewels in Armenia’s cultural crown: the Hellenic-style temple of Garni and the monastery at Geghard. Both are nearly 1,500m up in the foothills of the Geghama Range where the air is cool and fresh. Buzzards soar on the wind then swoop down into the ravines to snatch prey.

Garni is a sort of miniature Parthenon, built in the 1st century AD, reduced to rubble by an earthquake in 1679, then rebuilt in the Seventies. It’s an extraordinary building in a dramatic setting but Geghard Monastery is, to my mind, even more impressive.

Up a steep, cobbled road, through an archway, past pine trees swaying beneath yellow crags, this World Heritage-listed monastery is named after the lance said to have speared Christ’s flesh at the crucifixion.

My driver and I enter the main church, protected by high walls, and suddenly we are plunged into semi-darkness and 800 years of history. Devout Armenians are crossing themselves as they enter and lighting thin candles in a tray of sand.

Outside in the breeze I glance up at the rock face above and can see it is pitted with ancient caves: monastic cells once inhabited by monks. Somehow I can well imagine this place surviving intact for a further eight centuries.

Back at the wine festival in Areni, on my second and final day, the sun is slowly sinking towards the top of the gorge and people are winding their way home in groups, clutching bags and bottles.

I stop to talk to an elderly couple selling necklaces of dried cherries. The old man places one around my neck then resolutely refuses payment. He and his wife ask me to take their photograph and they sit there side by side, this happy old couple, perched on a wall, leaning into each other with this stupendous view behind them, all sunlit vineyards and ochre mountain ravines. And then I feel somebody fiddling with my pocket.

My urban antenna immediately makes me think I’m being pickpocketed, but then I realise it’s just a kind old fruit vendor, donating me some apples from his stall. We both laugh.

The apples are crisp and succulent and I eat them one after another on the way back to the car. It is a scene of utter peace and tranquillity and I make a vow: next year I’m bringing my family.