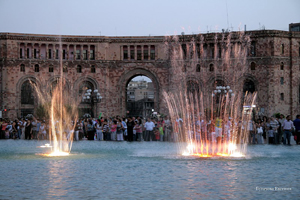 Travel.ru tourism service has found out which travel destinations in the CIS countries Russian tourists have preferred so far in the current year.

And accordingly, Yerevan, the capital city of Armenia, is in the top five CIS cities that are most popular for Russian citizens. And Armenia—with 7 percent—is among the CIS countries that are most-liked by Russian tourists. The number of Russian citizens’ online reservations for traveling to Armenia has increased by one-third so far in 2015, as compared to the year past.

Russian tourists have spent an average of 3.5 days so far this year in Armenia, and spent US$65 per day in a hotel in the country. According to the 2015 summer season results, Armenia’s Lake Sevan is in fifth place in terms of the most popular CIS resorts for Russian tourists.