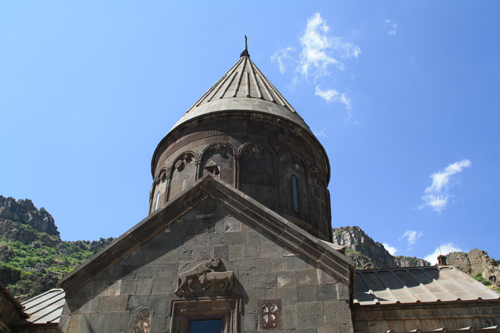 Every season in Armenia has its own bright colors, beautiful nature, and amazing flavors. Every season has its prominence, whether the snow-white winter wonderland, the golden autumn, the colorful spring, or the sunny summer with a bounty of aromatic and delicious fruits and vegetables. Great things come in small packages, in this case, small landmasses. Whether by land or air, this ancient land of Armenia awaits you to explore its riches and begin your adventure. Here we present 17 reasons to visit Armenia.

Armenia is a land of enchantment, with awe-inspiring untouched nature, seven climate zones, each offering a different topography, one more beautiful than the other. Everywhere you go, cities villages, forests, rolling green hills, waterfalls, gorges, or mountain tops, you will experience breathtaking views, crisp, bright sunrises, and mystical sunsets.

Armenian cuisine is a perfect example of how history influences the culinary traditions of any land. Enriched with more than five thousand years of history, the local cuisine in Armenia deserves a special mention. Some Armenian specialties that will give you an unforgettable impression about Armenia are Lavash, Gata, Harissa, Dolma and if you’re here in the winter try “The Armenian Winter Soup” Khash.

The hospitality of the Armenian people is well known. In Armenia, any reason could be an excuse for celebration. You will frequently find yourself in the midst of a celebratory event, where the many courses of homemade food, drinks, and music are never ending and continually offered. The offerings are symbols of friendship, and must never be refused. The warm hospitality is part of the Armenian tradition and belief of sharing what we have with sincerity.

4. Ride the Wings of Tatev

Wings of Tatev is the aerial tramway. It is recorded in the Guinness Book of Records as the longest reversible cableway in the world (5752 m), and is the shortest and most impressive route to mystic and beautiful Tatev Monastery. During the 12 minute ride to Tatev Monastery, you can enjoy unbelievable and breathtaking views of Armenian nature, an old monastic complex deep in the gorge below, the devil's bridge and the underlying gushing river with its pools of healing waters, to name a few.

It is impossible to think that a tourist would visit Armenia and not find Yerevan’s “Vernissage” open market, bazaar and all-around cultural curiosity center which starts by the Republic Square metro station and runs all the way to Khanjyan Street. While the term Vernissage is used to represent the inauguration of a temporary exhibition, over the many years it has proven to be one of the most important and constant elements of cultural life in Yerevan. Yerevan has no shortage of gift shops, but if you ask any resident where you can purchase Armenian souvenirs, the first answer will be “Vernissage”. Each Saturday and Sunday, beginning at about 10 a.m. and continuing until early evening, Vernissage is home to hundreds of artists, craftsmen, jewelers, stone cutters, seamstresses, potters and many more artisans.

When visiting Armenia with kids you can be sure that the journey will give you vivid emotions, long-lasting impressions and memorable encounters. A holiday in Armenia is the iideal choice to enlighten minds and imagination, while engaging in historic adventure. Moreover, Armenia is an excellent place for active and even extreme holidays. While in Yerevan visit Victory Park, Madenataran, and if you have children aged 5-12 years, you can visit the wonderful puppet theater at O. Tumanyan. If your visit is during May through October, be sure to go to the Republic Square in the evenings, the heart of Yerevan, and enjoy the colorful show of the singing fountains.

7. Travel with Peace of Mind

Armenia, one of the smallest countries in the world, is also one of the safest, boasting a very llow crime rate. During the summer both locals and tourists walk the city streets long past midnight. Health precautions are also minimal, making travel in Armenia worry free.

8. Learn How to Bake Lavash

No Armenian table is complete without Lavash, An ancient flatbread that forms an integral part of Armenian cuisine and has been described by the UNESCO Intangible Cultural Heritage of Humanity as "an expression of Armenian culture". Lavash symbolizes life and wisdom. In ancient times, Lavash was used during battles, as it lasted long and saved soldiers from starvation. Mothers baked Lavash in their tonir ovens, dried it, and placed it in the bags of the soldiers. If you would like to watch or try your hand at baking Lavash, Armenia's the place to do it.

Wine-making in Armenia has a very ancient history. This fact is proven by the recent archeological excavation in the caves of Areni village, where the oldest winery in the world was found. Armenia is also famous for its brandy. Armenian cognac, in particular, is renowned worldwide (winner of several awards), and was considered by the late British Prime Minister, Sir Winston Churchill, as his favorite.

Armenia is one of the oldest countries in the world. The rocky mountains, stones, and caves of Armenia are covered with petroglyphs. Make sure to visit Garni, Armenias last remaining pagan temple, and the three UNESCO Heritage sites - Cathedral and Churches of Echmiadzin, the Archeological site of Zvartnots, the Monastery of Geghard - as well as the Upper Azat Valley and the Monasteries of Haghpat and Sanahin.

11. Watch the Stars at the Byurakan Observatory

The Byurakan Astrophysical Observatory, founded by Viktor Hambartsumyan, is one of the leading academic institutions, Academy of Sciences of Armenia. Only a 40 minute drive from Yerevan, the Observatory houses the largest telescopes, the 2.65-meter reflector telescope and the 1-meter Schmidt telescope, which were built in 1976. Enjoy the enchantment of bright shining stars as you gaze into the universe and contemplate the possibilities.

12. Take a Selfie with Your Armenian Letter

13. Partake in the Rich Culture and Traditions

Armenia is a land rich with cultural heritage and traditions. While some traditions date back thousands of years, like its people, they have evolved to befit the modern age and are still celebrated today. The culture of Armenia encompasses many elements that are based on the geography, language, faith, literature, architecture, dance, and music of the people.

Cascade, the open air museum situated right in the heart of Yerevan, is a giant stairway connecting the city center with the residential center, consisting of 572 steps, with works of art exhibited at all levels of the complex, and is one of the most famous sites in the city. Along the Cascade you will see unique sculptures of contemporary art, including the Roman soldier and a huge cat by Colombian sculptor Fernado Botero, bronze hares by Briton Barry Flanagan, and many other valuable works by foreign artists which are part of the Cafesjian Museum.

Dilijan National Park surrounds the town of Dilijan (also called the Little Switzerland of Armenia). This lush forest of 24,000 hectares is one of the ultimate destinations for those who are inspired and invigorated by the great outdoors.

16. Join the Festivals and Events

Whatever your interest may be, Armenia has a befitting festival or event! Armenians love to celebrate. Accordingly, festivals are held in various regions promoting local foods, seasons, harvests, breweries, wineries, dairy, cattle, honey, sheep, to name a few. Find the list of upcoming events and festivals to plan your Armenian adventure.

IIf you are bold enough to try extreme activities, then Armenia is an excellent destination for you. Mountainous landscapes and a favorable climate make the country suitable for a number of extreme sports and activities. When the first snow comes in November, skiers start pining for the Tsakhkadzor and Jermuk Ski Resorts, while the most extreme outdoor enthusiasts prepare their winter gear for cold ascends of Mt. Ara and Mt. Aragats. While others delve into their adventures via bungee jumping, zip lining, paragliding, biking, camping, hiking, mountain and rock climbing, to name a few.
Armenia, Full of Mysticism that Captures Your Imagination, Evoking Past Centuries While Awakening Your Senses to the Present, Will Conquer Your Heart.