Armenia, where natural beauty, wine and brandy trump a troubled past and a volatile present 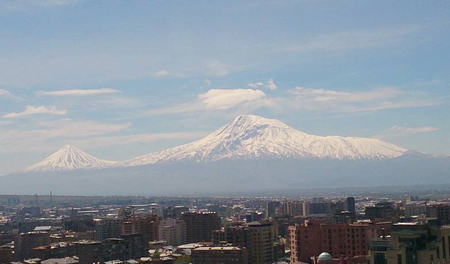 From a vertiginous 1,476 feet, the almond-coloured cityscape of Yerevan, Armenia’s capital, looks bewitching. A 572-step stairway has transported me to the Mountain Terrace of Cascades, a contemporary art museum and sculpture garden, from where I am soaking in a panorama of terracotta-roofed houses, statuesque buildings and green pastures stretching out to snow-swathed mountains. Above it all soars Mount Ararat where Noah’s Ark is believed to have landed, every bit as mighty as its biblical status.

Bucolic locations, monasteries set in tumbling landscapes, gurgling streams, lapis lazuli lakes — Armenia is picture-postcard turf. One of the cradles of civilisation, the pint-sized country was also the first in the world to officially adopt Christianity as the state religion in AD 301. With doughty neighbours (Turkey, Georgia, Azerbaijan, Russia and Iran) hemming it in, the nation is also at a geopolitical and cultural crossroads.

Much of that eclectic heritage is on view at the city’s numerous historic sights. At Matenadran, the museum of ancient manuscripts in Yerevan, we inspect fascinating memorabilia, including scroll upon scroll of medieval parchments and complex documents expounding on everything from geometry and cosmology to theology and poetry.

As the world wakes up to the charms of this Caucasian nation of 3 million people, tourism is galloping — at about 25% per year. Effervescent eateries, cafes and malls are mushrooming and stylish hotels are replacing vapid, Soviet inn-type accommodations.

Yerevan — located 12 km from Turkey — is where Armenia’s heart beats. It has street art-splashed alleys and leafy boulevards sprouting olive, cherry and mulberry trees. Cafés and wine bars remain open until early morning as punters hold chinwag over coffee and gelatos. Locals and tourists stroll along promenades or congregate around musical fountains prancing to classical tunes.

Buildings hewn from pinktuff (an igneous rock, formed from the debris ejected by a volcano) give Yerevan a pink glow as well as its moniker, the Pink City. The majestic Republic Square is studded with buildings. I take it all in one evening from a cafe on Abovyan Street while nursing my soorj, the Armenian coffee prepared in a long-handled, bronze jezve coffee pot that derives its name from the sound of slurping made by a contented coffee drin ..

Despite its cosmopolitan facelift, Armenia’s turbulent past still lingers. Roiled by bloody invasions by Romans, Persians, Ottomans and the Soviets, the scars of vicious ethnoterritorial conflicts and economic despair remain.

A visit to the Genocide Monument in Yerevan is a stark reminder of a mass extermination — the Armenian Genocide that killed 1.5 million Ottoman Armenians between 1915 and 1923.

Set on a hilltop, the spot also houses an underground gallery recreating the horror. Outside, a Spartan memorial stands over an eternal flame. There’s also a garden of trees planted by representatives of various nations that recognise the genocide, including the UK, US, France and Russia.

Not all of Armenia's troubles are in the past.

The country is still bedevilled by the Nagorno-Karabakh conflict with Azerbaijan that has left it with closed borders. Human rights issues and wrenching poverty add to its woes.

"Today, over two-thirds of Armenians live outside the country and have settled as diaspora communities," says our guide Sira. The country's most famous surname must be Kardashian - the socialite Kim Kardashian's family escaped from Armenia to America in 1913 but they still have strong ties to the country. In 2015, when the Kardashians went on an eight-day tour of Armenia, it created quite a kerfuffle in the tiny nation.

The image of Mount Ararat is a leitmotif in Armenia. Though the mountain was ceded to nearby Turkey in 1923, it continues to be the country's cultural signature, adorning everything from chocolates to wine bottles to apparel as well as Yerevan's coat of arms.

The mount isn't the country's only enchantment though. As I travel through dramatic, photogenic gorges and canyons which carve their way across the Caucasus Mountains, monasteries hewn out of the tuff rock, pagan temples, glutinous lakes and churches nestling in desolate locations add to the visual delight. From the Khor Virap Monastery, on Turkey's border, I take in the view stretching from vineyards to Ararat's 5,137-m-high summit.

The monastery - lying 30 km south of Yerevan - is a popular, out-of-town retreat. It was in a snake-filled pit below this monastery, the story goes, that St. Gregory the Illuminator, who brought Christianity to the region, spent 12 years.

The Tatev monastery, a ninth century shrine located on a large basalt plateau, stands on the precipice of a deep gorge of the Vorotan River.

A UNESCO World Heritage site, it played a pivotal role in the region's spiritual, political, cultural and educational history. The trip to the monastery isn't for the faint-hearted though.

We huddle into the world's longest reversible cable car line, a 5.7-kilometre engineering feat that spans a spectacular gorge. The car line runs from Halidzor village, connecting Yerevan to the village of Tatev, within walking distance of the monastery.

As we glide over an eye-popping landscape - misty mountains, bridges and glittering rivers - the guide explains that the $18 million cable car was mostly funded by private donations.

"It is part of a $50 million public-private project to develop tourism at Tatev and in the surrounding region, one of the 15 provinces of the ancient kingdom of Armenia," she adds.

From Tatev, we drive through a mountain bowl at an altitude of about 2 kilometres above sea level to Sevan. The Alpine Lake is one of the largest in the Caucasus region and located 1,897 metres above sea level. Its pristine beauty and powdery beaches are a big lure for tourists, especially the Russian oligarchs who land here discreetly in private jets. Also known as the Armenian Riviera, the lake's chameleon-like transformation - from Azure to mystic dark blue in the span of a few hours - is mesmerising.

From the seaside promenade, merely gazing at the waters and beyond is a meditative experience.

You know you are in wine country the moment you land at the Yerevan airport where a 20-feet-tall inflatable wine bottle greets you outside the terminal. Armenia, along with Georgia, Azerbaijan, northern Iran and eastern Turkey constitute what is called the Cradle of Wine in the Caucasus Mountains. Wine-making supposedly originated here in biblical times.)

The meticulous Armenians have kept records of viticulture since Noah's time when the biblical patriarch planted the first vineyard at the foothills of Mount Ararat. Some of the highest wine-growing regions in the northern hemisphere, diverse microclimate and rich, volcanic soils lend distinct flavours to an array of indigenous grape varietals.

Driving around the country, the advertisements for Ararat brandy are everywhere. I take a tour of its factory located in an imposing brick building on a hill overlooking Yerevan.

Here, I learn all about the production of the country's favourite tipple. Though fruit brandies from apricot, black plums, apples and other fruits, grown in orchards, are quite popular, seasoned Armenian vintners stick to grapes, the guide explains, as we amble down Charles Aznavour Alley stocked with "President's Barrels" dedicated to Presidents of various countries who had visited the factory, and which were being aged until a President asked for them.

The guide goes on to narrate an apocryphal story about Armenian brandy: during the Yalta Conference in February 1945, after dinner, the host and Russian leader Josef Stalin asked British Prime Minister Winston Churchill if he wished to have a drink. "I'd like a brandy with my cigar," boomed Churchill.

Stalin then offered his guest Ararat Dvin, the best Armenian brandy. So enamoured was Churchill of the honey-hued liquor that Stalin instructed that Churchill is presented with a case of Ararat every month. Thereafter, Armenians say, Churchill swore by the three Cs that made his life worth living - cognac (Armenian), cigar (Cuban) and coffee!