George Clooney on Armenia cuisine: I will put on 400 pounds if I stay here too long: 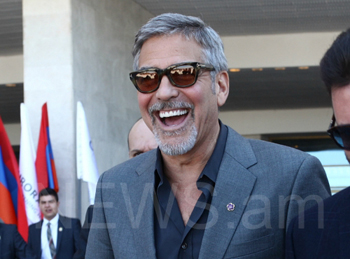 American actor, producer, director George Clooney has arrived in Armenia on Friday, April 22. Clooney is in Armenia less than 24 hours but he has already shared his first impression about Armenian food and people.

“I have been here less than 24 hours and so far I’ve liked the people and food”,- Clooney said.

The “Ocean’s Trilogy” star has mentioned that he liked Armenian dolma and other dishes made with meat especially spicy food. But according to Clooney they are too heavy for him and in case of long-stay he can get fatter.

“I will put on 400 pounds if I stay here too long”, Clooney told NEWS.am STYLE correspondent.